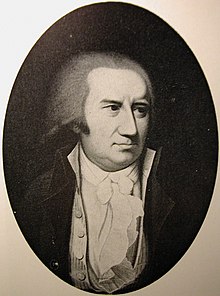 Bernt Anker was Norway's richest man around 1800. He transferred his enormous fortune to a Fideikommiss . This was completely lost after 1814.

He grew up in Christiania and came to the University of Copenhagen in 1764 . In the following three years he made a long tour of Europe with his three brothers and two cousins, visiting Sweden, Germany, Italy, France and Great Britain. In 1767 he received the title of Counselor and took over the family business. He was soon one of the leading figures in the patriciate of Christiania. In 1778 he and his two living brothers were raised to the Danish nobility, taking the name "anchor". He was eager for honorary degrees. In 1774 he became a budget councilor, in 1790 he became a conference councilor, in 1793 chamberlain and in 1803 a knight of the Dannebrog order .

His marriage to Morten Leuch's widow brought another fortune to the company in 1773. When the inheritance was divided according to his father in 1783, each of the brothers received their own independent farm. Bernt Anker became the richest man in the country with a net income of 100,000 Rigsdalers a year. In 1784 he took over the ironworks in Moss . With the help of a government loan, he built a cannon foundry that became the main supplier to the Danish-Norwegian fleet. He owned the gold and copper works in Eidsvoll and many other copper factories. He also resumed the operation of the ironworks in Hakadal . He operated an important fleet and equipped the first Norwegian East India driver in 1791. But the timber trade remained the main business and was based on the large forest holdings in Østlandet . When he died in 1805, his fortune was estimated at one and a half million Rigsdaler.

The surviving letters to his cousin Carsten show that his business was a constant source of concern for him and that he constantly suffered from liquidity problems. With his relatively low cash equity he was economically at greater risk than other timber traders. In addition, he took over the heavily indebted house of his brother Jess in 1798. At his death, his active assets were offset by many debts that had accrued through various guarantees, obligations and cash benefits to the children of his brothers.

Against this background, his most important political publication, “Plan proposé pour une Banque locale à Christiania”, which was published in the winter of 1796 in the magazine Hermoder , can be seen. It was initially written in French, but was then translated. Anker's plan was introduced by a lengthy article entitled “Om Banker i Almindelighed” (About banks in general). Like his father 30 years earlier, he advocated an increase in the amount of money in circulation. At that time there were almost 30,000 Rigsdaler in paper money in circulation in Christiania, compared to a tangible value of movable goods of 1,000,000 Rigsdaler. The shortage of money was countered by large loans from the royal treasury, but the government placed great emphasis on monetary stability. The timber exporters felt that it was more about the domestic Danish economy. But if the Danish krone rose against the British pound, the profit for Norwegian wood exporters decreased. In addition, there was a crisis in wood exports when it fell by a third from 1792 to 1797. Anker was therefore interested in the change in monetary policy. Whenever he appealed to the love of the country in various turns, he harnessed national feelings for his plans and identified his interests with the good of the state. It was modeled on the English banks, where there were credit institutions in every commercial town. He proposed a bank in the form of a joint stock company with 2000 shares of 100 Rigsdaler each. The rate between paper money and coins should be determined by the market. But a number of Christiania's citizens were against his plan. Leading personalities had proposed as early as 1794 to set up a bank like the Danish species bank and the banks in the duchies. Their goal was a fixed exchange rate between paper money and coins. That would have benefited inner-city retail. Anchor could not prevail.

One of his most important public goals was the establishment of a Norwegian university, for which Nicolai Jacob Wilse founded a movement in March 1793. It should meet practical national training needs. He was appointed to the corresponding founding committee. At the beginning of the spring of 1795 the request was forwarded to the king and rejected.

Anker was also inspired by national sentiments, but not a reformist. At big festivals he fed the poor in large numbers, but he had no sense of the demands of the workers and peasants, and he mocked the prisoner peasant leader Lofthuus as a "low soul, a rascal in civil life and a stupid rebel in the political" .

In 1780 he co-founded “Det dramatiske Selskab” (The Dramatic Society) in Christiania, the cultural center of the city, and often played leading roles on stage himself. He also built “Det Ankerske Waisenhus” with his wife in 1778.

Nothing is left of what he gave to the city and the country. Most of his writings were never printed. His silver-clad coffin was taken to various cemeteries until it finally came to Copenhagen. His entails got into financial difficulties in the crisis years after 1814, and when the wood storage area burned down completely in 1819, this meant the end of his property.