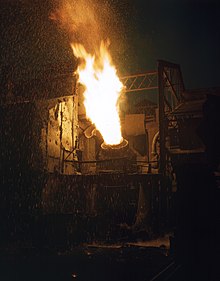 The Bessemer process is no longer used today for steel production. It is named after its developer Henry Bessemer , who released it in England after the mid- 19th century .

In the so-called Bessemer pear , a cylindrical refractory vessel, air is blown through the very carbon-rich pig iron that is melted in the blast furnace . The carbon and other elements burn to carbon monoxide , carbon dioxide and other oxides, causing the temperature of the melt to rise well above the melting temperature of pig iron of 1,150 ° C to at least that of steel, which can be up to around 1,550 ° C. When the carbon content in iron has fallen below a certain value, the pig iron has become steel. The person skilled in the art can tell when the composition corresponds to the desired one from the flame color at the outlet of the Bessemer pear.

The Bessemer pear is a so-called bottom blowing converter. For the Bessemer method to work in the acid process, the pig iron must be low in phosphorus and sulfur . Pig iron with this impurity was processed into steel in the Thomas pear .

Description of the Bessemer pear

Schematic representation of a Bessemer pear 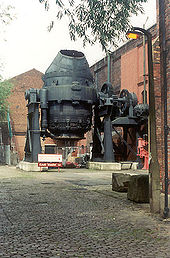 The Bessemer process uses an oven with a movable pear (converter, retort). This Bessemer pear A with neck B is made of sheet iron and lined with refractory bricks. These bricks are made from quartzite , mudstone and small amounts of refractory clay and fired for the acid process . For the basic process , stones are prepared from burnt and ground dolomite with dehydrated tar by subjecting the mass to strong pressure in hydraulic presses. Sometimes the stones are stamped into iron shapes and then annealed.

The bottom piece C is either firmly riveted to the main body A , or can be removed therefrom in order to be tamped with refractory material by leaving conical openings for receiving seven clay molds, each of which in turn has 7-13 cylindrical channels (nozzles) of 9–12 mm diameter for wind feed. The wind box D , which runs on rollers, is pressed under the bottom of the pear by means of a hydraulic piston k . The pear is suspended in pins a and b , which rest on a frame E. The blown air flows from the wind conduction tube F through the tube c into a space between the pin a and the sleeve d resting on the stand E and passes through the tube e into the wind box D connected to it by a bracket f , from which the wind passes the nozzles get into the bulb.

The wind is regulated by a worker by means of a valve on the wind conduction tube, or the entry of wind regulates itself when the device is tilted by means of an eccentric ring on the pin a , which when turned raises and lowers a lever arm and thus also one above the tube mouth F in G , valve held down by a weight. The pear A is moved by a tilting device by means of a toothed wheel H , in which a toothed rack g moved by the piston of a hydraulic press engages. 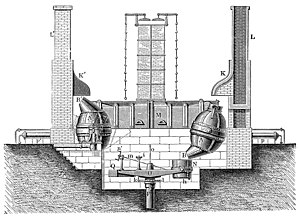 The pig iron is allowed to flow in directly from a blast furnace or from a cupola in a channel through the neck of the pear A ' and then tilted open while the wind is automatically turned on at the same time. The neck B 'of the bulb A' is then located under a screen K ' connected to the forge L ' .

After decarburization is complete, melted mirror iron is poured into a cupola or flame furnace M through the neck or red- hot ferromanganese or silicon iron is added, the pear is straightened up again, blown for another 2-3 seconds if necessary and then left for 5–3 seconds with the wind off Stand still for 10 minutes to allow the gases that have been absorbed and that create blistering to escape.

The pear A is then inclined and its contents emptied into the ladle N , which is located at the end of the balancer O of a hydraulic piston P which can be raised and lowered. Q is a counterweight on the other end depending on the content of the ladle of the Balanciers, N is moved. To fill the iron molds standing in a semicircle around the crane, a stopper h is pulled out of an opening in the bottom of the pan and this is guided over the molds by moving the balancer in a semicircle by inserting the gear k into the gearwheel with an engagement device at i l can intervene.

The tipping of the ladle N for cleaning is done by means of the rod m by turning at n ' ; o Sheet metal wall to protect the worker turning the crank disks i and n ' ; p p ' bearing for the press cylinders of the hydraulic machine used to move the tilting device.

Other methods of steel production

The Bessemer pear is no longer used today, but enabled mass production of steel in the middle of the 19th century, which was a prerequisite for large steel structures. The procedure was the basic process in the 19th century by Thomas process optimized and later by the inflating converters in the LD process replaced. There are also other methods of steel production: in electric arc furnaces and in Siemens-Martin furnaces .