A block or tray is a robust object which is used to slightly increase in a stable manner ( jack up ) and to provide a stable distance to a surface or component. Bock or Gais is also an old word for stationary tools.

The slope as the simplest design of a buck consists of one or more crosses made stable in X-shape (in the slope position as with the St. Andrew's cross ). Bock is also an umbrella term for A-shapes of support structures. Trestles can be collapsible (like the trestle ladder ) or mobile , depending on the area of ​​application . A height of just under one meter is typical. Common materials for trestles are wood and metals.

Trestles are used in a wide variety of areas: As trestle stands , they present posters. They are used as supports or seats in trade and construction. In bakeries, baking trays with pastries or dough pieces are usually placed on mobile trays. Special trestles are used to secure transport and to store boats, for example. 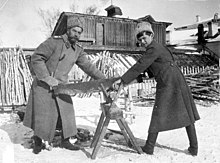 Use of the sawhorse

A sawhorse is a tray that is used to immobilize the material to be sawn. It consists of two crosses connected by a horizontal piece of wood.

The support frame or jack stand is intended for the selective transfer of loads. It consists of a vertical, height-adjustable pole on a three- or four-legged support structure.

As part of a framework ( e.g. as a lattice frame or scaffolding part ), trestles appear in the generalized form “node over triangle”. For example, one speaks of a post windmill , a gantry bridge , a gantry crane or a dam construction trestle . Constructions of this type combine a high load-bearing capacity, which can be calculated on the basis of requirements, with a low dead weight.

A bearing block is a machine element that holds a plain bearing or roller bearing in a certain position so that a shaft can only move as intended (as is the case with a fixed castor, for example ). - Another meaning of the word can be a support frame used for storage .

Devices with three or four stable feet the size of a goat , on which one can work while sitting, are called (in analogy to the stability of a "stubborn goat") buck or goat . Historical examples are the Schindelbock for the production of wooden shingles or the Dengelgaiß for dengeling the scythe, on which tools are mounted that are stabilized by the weight of the person sitting.

The firebock is used to ventilate firewood. He has been known since the Iron Age.

Banquet on a slant table in the 14th century

A tray can be covered with wooden panels and used as a table or as a mobile workbench . It's simple, makeshift furniture that shows up early in history. Even stool in this form were common.

Trestles that are upholstered and covered with leather serve as gymnastic equipment.

The Spanish goat and the punishment donkey are designed as deliberately uncomfortable sitting devices for punishment and torture purposes .