Garden with pond, in the background the castle

In the Münster Botanical Garden

The Münster Botanical Garden is the hortus botanicus of the Westphalian Wilhelms University in Münster . It is located directly behind the Prince-Bishop's Palace , within the palace park .

The orangery in the botanical garden

The Münster Botanical Garden was founded in 1803 by decree by Heinrich Friedrich Karl vom und zum Stein at the medical faculty of the Westphalian Wilhelms University. The first director was Professor Franz Wernekinck .

The garden was laid out as a teaching and research facility; the first greenhouses were built as early as 1804. However, in order to compensate for financial difficulties, plants had to be sold again and again. In the turmoil of the occupation of Westphalia by French troops and the consequences of the Congress of Vienna in 1815, the concept was changed: mostly native plants were to be grown.

Expansion of the garden 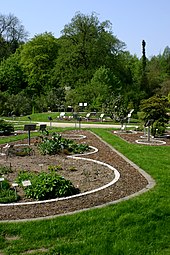 From 1817 Bernhard Revermann was the new head gardener. He stayed at the head of the garden until 1869. A seed catalog was published for the first time under his leadership. The orangery was built in 1840 . This building is a listed building.

The management of the garden was entrusted to a trained botanist for the first time in 1867. Theodor Nitschke (1834–1883) succeeded during his tenure in preventing the plant trade. In 1887, the new director, Oscar Brefeld, began building an auditorium in the Botanical Garden. He also built the Botanical Institute building on the south side of the garden.

In 1909 the well-known botanist Carl Correns took over the management. In the five years of his tenure he carried out crossbreeding experiments in Münster.

During the difficult times between the beginning of the First and the end of the Second World War, Friedrich Wilhelm Beneke ran the garden from 1915 to 1935. A tropical house was built for the first time under his direction . His head relief and that of the head gardener, Georg Ludewig, are immortalized on the tropical house. In the First World War there was no damage from the effects of war, but it was caused by a lack of money. From 1935 Walter Mevius was director. Under his leadership u. a. a move was discussed, but this was not implemented. The garden was badly damaged in the air raids on Münster during the Second World War . All the greenhouses were destroyed and most of the plants perished. The institute building was destroyed in 1944.

The reconstruction was carried out by Siegfried Strugger. In 1949 five greenhouses had already been rebuilt, and in 1952 the garden existed again in a pre-war condition. However, heather and moorlands have now also been established.

Under the director Hans-Dieter Oberdieck, who followed in 1960, succulents were also grown in the garden.

In the 1990s, under the direction of Herbert Voigt, an artificial stream was added to the garden west of the central pond, a wild meadow and a lime moor . In addition, a pavilion was built as a visitor center near the entrance. In 1998 the outdoor area was converted into a Mediterranean landscape. In 2005 a medicinal plant garden was created. 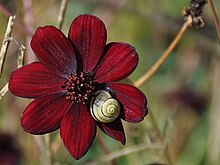 The Botanical Garden is owned by the University of Münster and is used by them as a research facility, but private individuals are also allowed to enter. Admission is free.

The botanical garden is divided into several areas, including:

The botanical garden in Münster is now around 5 hectares in size. The ten greenhouses take up approx. 2,000 m². There are a total of around 8,000 plant species in the garden, which attracts 200,000 visitors annually.

The Botanical Garden is operated and financed by the Westphalian Wilhelms University. In addition, in 1990 the Botanischer Garten e. V. founded, which finances itself through membership fees and above all publishes books and procures information boards. Companies also donate money that is used for a specific purpose. Since spring 2019, private individuals have been able to sponsor individual plants.

Commons : The Botanical Garden in Münster  - Collection of images, videos and audio files