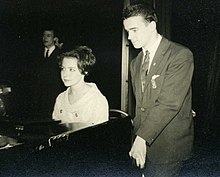 At the age of six, Brenda stood on stage for the first time and sang Hank Williams songs. Accompanied by her mother, she appeared in talent competitions and on radio shows. When she was seven, she took the stage name Brenda Lee . After the early death of her father, she was able to support the family with her income and enable her siblings to study. As early as the early 1950s, she appeared in Canada's Main Street Jamboree on the side of Jimmy Martin and was hired by Red Foley in 1955 for his television show Ozark Jubilee .

In 1956, Decca Records signed a record deal with Lee. The first single was the Hank Williams classic Jambalaya , her first hit was the song One Step At A Time , written by Don Woody , which made it into both the pop and country charts in 1957. The singer got her nickname "Little Miss Dynamite" from the title Dynamite . Owen Bradley , the producer Patsy Clines with whom she became friends, also oversaw her next recordings. The breakthrough came two years later with Sweet Nothin’s . She had her first number 1 hit in 1960 with I'm Sorry .

Although Brenda viewed herself as a country singer, she was perceived by the public primarily as a rock 'n' roll and pop singer. The country scene, especially the radio stations, was suspicious of the very young, chain-smoking girl with the rough voice. In the first half of the 1960s she was one of the top-selling stars of pop music.

In February 1963 she visited Germany to make German recordings with Bert Kaempfert (“In my dreams”) in the Hamburg Polydor studio. On this occasion she also appeared in the Star Club . But then she was among those who were ousted by the Beatles and other British groups. Without changing her style too much, she appeared on the country charts in 1969 with Johnny One Time . She teamed up again with Owen Bradley and had numerous top 10 hits by the late 1980s.

In 1990, she moved to Warner Brothers after thirty years after litigating Decca / MCA over outstanding royalties that resulted in a settlement. She could no longer build on the successes of the past, but was still a welcome guest at TV shows and nostalgia concerts. In 1997 she was inducted into the Country Music Hall of Fame as the youngest member of all time . In 2002 she was elected to the Rock and Roll Hall of Fame .

Brenda Lee “was the perennial teenager of American pop music, a mercurial nymph six feet five with an amazing voice. She sounded like a frustrated green widow around 30 who has listened to too many Edith Piaf records. "

"[...] the only thing that was really unbelievable about her, that remained her voice: freakish, she sounded sexy and as if she were at least thirty, knowing, really full of Weltschmerz. By the time she was seventeen, she had a ballad style pretty much in line with Edith Piaf's, just as flabby and bravado. She could be fantastic. It conjured up a three o'clock in the morning atmosphere, ashtrays full of butts and lipstick marks on the coffee cups, small, stuffy rooms, despair. Then you saw her, and she looked like a Schildkröt doll, shiny and lacquered, with eyes that really open and close. This woman / child contradiction was her secret [...] Her voice hasn't changed, it's still like bad whiskey. Sometimes she brings out new songs, and they're not good songs, […], but her voice is still sharp like a laser beam […] ”