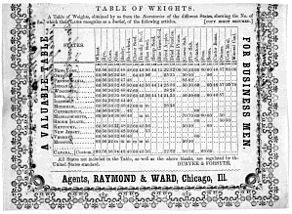 Conversion table for the equivalent mass per bushel. USA circa 1854

Although the bushel is actually a measure of space, it has also been used as an equivalent measure of weight for certain goods, such as apples. For this purpose, conversion tables were issued which - depending on the type of goods - determined the bushel weight , i.e. the mass that corresponded to a bushel of a certain type of goods.

Nowadays the bushel is only used as an equivalent grain measure in the United States ; this unit has practically no other application.

There is the - now historical - British bushel (imp bu) with roughly 36.4 liters and the US bushel (US bu), which is roughly 3% smaller with roughly 35.2 liters. 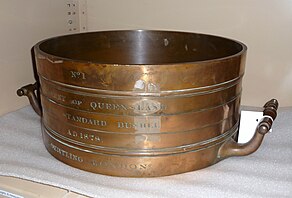 With the Weights and Measures Act of 1963 and 1976, the British system of measure of measure was adjusted and, among other things, the bushel was abolished. This bushel was defined in the Weights and Measures Act of 1824 as eight times a gallon . The British Imperial Bushel was only used in bulk goods (e.g. grain, coal, fruit), although it was derived from the gallon, which is applicable to both bulk goods and liquid goods.

In the USA the bushel has its origin in the historical English Winchester bushel, which at the time of its abolition in England in 1824 corresponded to a cylindrical volume with a diameter of 18½ inches and a height of 8 inches. The US bushel was derived from this unit and defined with exactly 2150.42 cubic inches, which is around 1.1 liters smaller than the British bushel, which has since been abolished, and in contrast to it is in no proportion to the gallon. The American bushel is only used for bulk goods and is the basic dimension for the nowadays uncommon system of dimensions for bulk goods (dry measure).

Used as a unit of account for grain in the USA

In trade (e.g. on commodity futures exchanges ) the bushel is now used as an equivalent weight measure. The mass of a bushel depends on the type and moisture content of the grain. Since the USA is one of the largest grain producers, the unit "bushel" is important worldwide as a measure of the mass of a quantity of grain. Nowadays, when grain prices are given per bushel, this “bushel” is meant.

In the metric system of measurement , the accounting unit "bushel" (as a measure for determining the amount of grain) is comparable to the so-called dry matter in grain, which is calculated based on the actual mass and moisture content as well as the basic moisture of the dry matter.

Determination of the billing amount in bushels

To determine the amount of grain charged in "bushel", the grain is weighed and the moisture measured. If the actual moisture is higher than the basic moisture ("standard moisture") of the respective grain type, the equivalent dry matter must be calculated as follows:

In the next step, the dry matter is divided by the “standard weight per bushel” and the number of “bushels” is obtained.

Bushel as a basis for determining the bulk density of grain

Bushel as the basis of area yield

In North America, the area yield (English: "yield") of grain is given as "bushel / acre ". When converting "bushel / acre" to the metric area yield unit "dt / ha ", it should be noted that this initially applies to the specified basic moisture ("standard moisture") of the respective grain type and for other basic moisture levels for the target unit "dt / ha" is to be converted accordingly.

Bushel as a basis for price information

In the United States of America, all types of grain are priced in "$ / bu" . The grain price in "$ / bu" determined by the Chicago Board of Trade is a globally recognized price indicator.