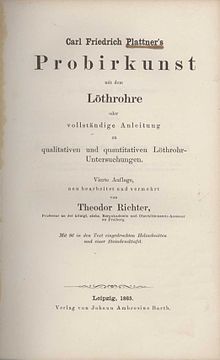 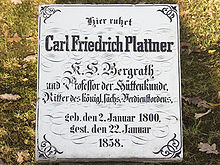 Plaque on Plattner's grave in Freiberg

Plattner was born as the son of a miner in 1800 in Kleinwaltersdorf (today a part of Freiberg ). From 1815 to 1817 he studied at the Freiberg mountain school; he then took up studies at the Bergakademie Freiberg , which he finished in 1820.

The following years he worked in the Freiberg ironworks and devoted himself to research. His work Die Probirkunst mit dem Solötrohre , first published in 1835, received a lot of attention and was reprinted several times. In order to expand his knowledge of analytical chemistry , Plattner studied from 1838 to 1839 with Heinrich Rose in Berlin . When he returned to Freiberg in 1840, he was named Obigartswardein .

In 1842 he took over the professorship for metallurgy at the Freiberg Bergakademie as the successor to Wilhelm August Lampadius . He introduced lectures on soldering tube testing and from 1851 also gave lectures on metallurgy .

Plattner also researched and published on metallurgical roasting processes and developed a process for extracting gold with chlorine gas that was used worldwide. In 1856 Plattner became Bergrat. Due to health problems, he had to give up teaching that same year.