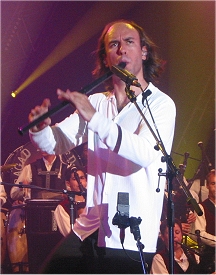 Carlos Núñez at the Festival Interceltique in Lorient

Carlos Núñez (born July 16, 1971 in Vigo ) is a Galician Celtic folk musician. His preferred instrument is the gaita (Galician bagpipes). He also plays the recorder , which he studied at the Madrid Conservatory alongside baroque music .

At the age of twelve he performed at the Festival Interceltique in Lorient, France . There he also met the Irish musicians from The Chieftains . A very successful collaboration emerged from this encounter; so he worked on several albums of the group and inspired the band to record the album Santiago . That is why Carlos Núñez is often referred to as the seventh chieftain.

His own albums are characterized, among other things, by the fact that he combines Celtic music with influences from other musical styles. In addition, Carlos Núñez managed to win many well-known artists to collaborate on his albums. Jackson Browne , Mike Scott ( The Waterboys ) and Sharon Shannon were among the over 100 guests on the album Os amores libres . In 2004 he worked on the soundtrack for the film The Sea in Me .