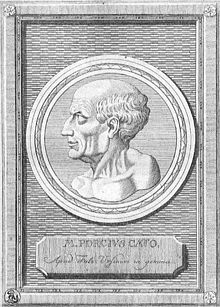 Marcus Porcius Cato the Elder in a post-antique engraving

Cato maior de senectute , in German Cato the Elder on Age , is a Latin philosophical dialogue by the Roman author Marcus Tullius Cicero . In it, Cicero lets the censor Marcus Porcius Cato the Elder († 149 BC) appear as the 83-year-old main character and present views on age . The work is dedicated to Cicero's friend and publisher Titus Pomponius Atticus .

Cato converses with Gaius Laelius Sapiens , the main character in Cicero's Laelius de amicitia , and Publius Cornelius Scipio Aemilianus Africanus , known as "the younger Scipio". The starting point of the conversation is that Laelius and Scipio are amazed at how miserably and painlessly Cato seems to endure his old age, while most of his peers tend to complain about the deterioration of their bodies and their prestige.

Cato refutes these allegations one after the other, referring to numerous ancient Roman personalities such as Quintus Maximus , the poet Ennius or Appius, and defends old age as a necessary and enjoyable life. His arguments are as follows.

The explanations are pervaded by excursions into the biographical and historical and therefore also have social and mental history value.

The dialogue is obviously fictitious and has almost no historical basis. Cato was chosen by Cicero as the main character because he enjoyed a posthumous, almost heroic veneration in Roman society of his time, "so that the scriptures receive all the greater authority through him" ( quo maiorem auctoritatem haberet oratio , § 3). Cato was known by the nickname "the Censor" and was famous for his strict moral standards. As a result, he was to a certain extent an ideal image of Roman virtues and thus suited to Cicero's intentions.