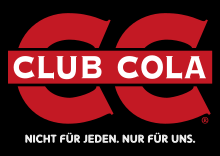 one of the labels in GDR times

Club Cola is the name of cola - soft drink , in particular, in the GDR was popular. After a short break after the fall of the Berlin Wall , the drink has been produced again with a different recipe since 1992.

At the request of the SED and other state organizations, from the Leipzig spring fair in 1966, an own cola drink similar to the Western models was to be developed. On April 19, 1967, the first Club Cola was bottled in the Berlin beverage combine. At the Leipzig spring fair in 1972, the drink was awarded gold for the first time in the soft drinks category and later received other prizes, which were printed as eight gold-colored brands on the black label of the bottle.

Bottling in Berlin was stopped on March 31, 2003 and since then has only been bottled in the southern Brandenburg town of Bad Liebenwerda . The “former Berliner” has not been a real Berliner since the closure of the mineral fountain on Indira-Gandhi-Strasse in Berlin-Weißensee . As a result of this “move”, the mineralization of Club Cola has changed. While the Berlin spring is rich in minerals (total dissolved minerals: 1072 mg / L), the mineralization of the spring in Bad Liebenwerda is rather low (86 mg / L).

Prices in the GDR

The sales price was fixed as follows on the package sizes and was never changed: