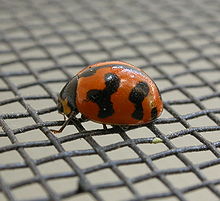 The beetles reach a length of 3.8 to 6.7 millimeters and a width of 3.3 to 5.5 millimeters. The body shape is elongated oval and arched. The head is black, two creamy yellow, almost triangular spots are on the inside of the compound eyes . The pronotum is black, the anterolateral corners are cream-colored to orange. The scutellum is black. The wings are carmine, orange or yellow. Below the scutellum is an oval black spot. A large black three-lobed spot is on the humeral callus. A black transverse band runs on the rear third of the wing, but it does not reach the outer edge. Three smaller black apical points - one sutural and two laterally - are usually fused into a transverse ligament. An irregular black stripe runs along the wing seam. The drawing elements are variable, they can be reduced or merge.

The beetles are widespread from South and Southeast Asia to Australia and are the most common ladybirds in many areas. They are found in many parts of India , Sri Lanka , Nepal , Bangladesh , China , Southeast Asia, Japan , Australia, Tasmania and New Zealand .

The adults and larvae are predatory and feed on tube aphids (Aphididae) such as the pea louse , dwarf cicadas (Cicadellidae), tube insects (Ortheziidae) and leaf fleas (Psyllidae). Furthermore, two owl butterfly larvae ( Helicoverpa armigera and Spodoptera litura ) belong to the range of prey identified so far. Populations can be found throughout the year. The beetles live in southern India from July to September.