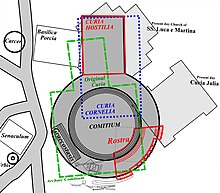 Architectural history of the buildings of the Curia

The Hostilia Curia next to the Comitium in the Forum Romanum was a meeting place for the Roman Senate in the Roman Republic .

According to legend, the Hostilia Curia was originally an Etruscan temple that was used under the rule of Romulus (approx. 771–717 BC) as a meeting place for advisors to the king, the senators . When a fire destroyed the converted temple , a new building was built by order of Tullus Hostilius , the third Roman king (673–641 BC). The building consisted of a larger interior space in which the Senate met, the secretarium senatus , a courtroom specially designed for senators, and the Chalcidicum , the pillared hall in front of the assembly room. Lucius Cornelius Sulla Felix expanded the Curia in 80 BC. When the number of senators had doubled. During riots at the funeral of the politician Publius Clodius Pulcher in 52 BC. The Hostilia Curia burned to the ground. Faustus Cornelius Sulla , a descendant of Lucius Cornelius Sulla Felix, rebuilt the Curia and named it Cornelia Curia . As a successor building, Gaius Iulius Caesar had the Curia Iulia built as part of the massive redesign of the forum .