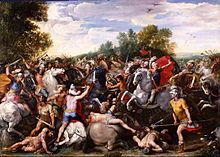 Victory of Tullius Hostilius over Veji ( Giuseppe Cesari , around 1601)

Tullus Hostilius, a grandson of the Sabine Hersilia, wife of Romulus , succeeded Numa Pompilius in 672 BC. On the Roman royal throne. However, it was fundamentally different from its predecessor, who had campaigned for peace and prosperity.

Tullus Hostilius was a warlike king . He expanded the army and made Rome a city feared by its neighbors. He moved after the story of Livius and Dionysius z. B. against Alba Longa to field. With his general Mettius Fufetius , however, he agreed to avoid major bloodshed and not let the two armies go into battle against each other. Instead, a battle between triplets from both armies should decide the outcome of the war . The Horatians on the Roman side and the Curiatians on the Albanian side competed against each other. After the deaths of two Romans, the surviving Horatian resorted to a ruse and was able to kill the three Curiatians. At first he pretended to flee, whereupon the three Curiatians pursued him. Since they were wounded to different degrees, and so were each slower, the remaining Horatian could fight and kill each one individually. The victory therefore belonged to the Romans. However, the peace was short-lived.

Incited by Mettius Fufetius declared in 665 BC. The Vejenter and the Fidenaten Rome the war. Tullus Hostilius now asked Alba Longa, ignorant of the inglorious role of Mettius Fufetius, to take part in the fight. Mettius Fufetius pretended to accept. In the decisive battle, however, he and his troops waited to see which side would prevail. The Romans were victorious and the next day Tullus Hostilius had Mettius Fufetius captured as a traitor and on the following day he was spanned between two horse-drawn wagons and torn apart. The city was destroyed by the Romans as punishment for treason. Its residents were settled in Rome and given citizenship.

After the victory, Hostilius built a new Senate building, the Hostilia Curia . The Roman Senate would meet in this building for centuries.

Tullus Hostilius fought a few more wars in the following years, but then fell seriously ill and turned to religion . In the 32nd year of his reign, his house caught fire , probably from a lightning strike . Tullus Hostilius, his wife and children perished in the flames.