The Iulia Curia in the Roman Forum. Adjacent to the right is the church of Santi Luca e Martina , to the left the Temple of Saturn and the Phocas column 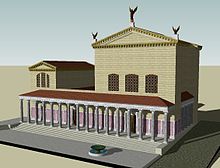 Reconstruction of the Curia

The Curia Iulia at the Roman Forum in ancient Rome was the meeting building of the Senate . It has been partially restored recently. The construction begun by Caesar , which was only completed under Emperor Augustus in 29 BC. It was partially rebuilt on the older Cornelia Curia , which in turn was built on the ruins of the Hostilia Curia , of which remains have been found under the adjacent church of Santi Luca e Martina . The Curia Iulia allowed direct access to the new Caesar forum , which was built by Caesar in 46 BC. Was inaugurated and where the senators often gathered while the new meeting building was not yet available.

Its present action, the Curia Julia owes the renovation from 1932 to 1937, tried as far as possible, the appearance of the building in the wake of last reconstruction under Emperor Diocletian (after a devastating fire in 283 AD.) To reconstruct . The condition brought about under Mussolini gives the impression of representing one of the best preserved buildings of late antiquity in Rome. However, this is due to the fact that the building was converted into a church under Pope Honorius I and was consecrated as Ecclesia beati Hadriani in 630 , today known under the name of Sant'Adriano in the Roman Forum . The last Baroque interior of this church was transformed into what Antonio Cederna called "a kind of backdrop for The Last Days of Pompeii " in keeping with the spirit of the 1930s .

The Diocletian Curia has a rectangular plan. On the outside, it is supported by wide pillars that are in alignment with the facade and are crowned with gables . The traces of medieval burial niches in the wall can still be seen at different heights in the facade.

The outer brick walls, with relief arches and pierced by large windows, were originally clad in the lower part with marble slabs, of which sparse remains have been preserved to the left of the entrance, in the upper part they were clad with stucco , which should represent marble slabs. A short flight of stairs, recently renewed, leads to the Curia hall.

The bronze entrance doors are replicas; the originals were attached to the Lateran Basilica , the Pope's episcopal church , in the 17th century .

The large interior with a height of 21 m, a width of 18 m and a length of 27 m corresponds in dimensions more or less to the proportions that Vitruvius suggested for the construction of a Curia. According to the suggestion of the Augustan architectural theorist, the height should be half the sum of width and length (Vitruvius, De Architectura, V. 2.).

Most of the room is still furnished with the floor from the time of Diocletian , made of marble with inlaid stones of different colors, including serpentine (green) and porphyry (dark red). It is a particularly valuable flooring that is called opus sectile , "cut work", due to the technology used. This technique was a common alternative to mosaic floors at the beginning of the late Republican period. In late antiquity, it was used almost exclusively in public and sacred buildings.

The hall is divided into three elongated sections. The left and right take three wide, low steps on which the armchairs of the 300 or so senators stood. Between the two doors in the back wall is a wide plinth on which the chairman sat.

There are two large reliefs on display in the Curia today, known as Plutei or Anaglypha Traiani. They were found in the middle of the forum square. The reliefs depict scenes from the Principate of Trajan . On the left, incomplete, the citizens are forgiven their tax debts and the lists of debts are burned in the presence of the emperor. On the right, the alimenta are used, low-interest loans for agriculture, the proceeds of which should be used to support children in need. As contemporary representations of the forum on which the scenes take place, the two reliefs are of great value.