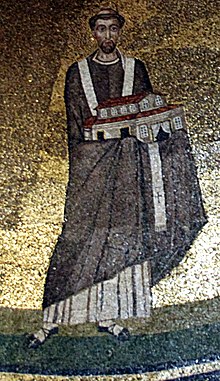 Honorius I († 638 ) was Pope from November 3, 625 to October 12, 638 . Because after the death of Gregory the sources from a time of turmoil are sparse, comparatively little is certain about the life of Honorius.

As an author, he expressed himself in letters to the Patriarch of Constantinople Sergios , who wanted to get him to his side in the Monophysite dispute . In it he shows himself to be a real politician. He agrees with Sergios that only one willpower (θέλημα, 'voluntas') has worked in Christ, but the question of whether this expresses itself in two willpower (ἐνέργειαι, 'operationes') is subtle and should not be made into the doctrines of the Church will. After his death, the theological controversy over monotheletism flared up again.

In 638 the Patriarch of Constantinople and Emperor Herakleios convened a synod. It was supposed to save the unity of the church in a compromise formula with a new interpretation of the creed, the ecthesis (ἔκθεσις), which was then proclaimed by the emperor as an imperial law. The Ecthesis came too late: in the same year the exponents of the arguing directions had already died: the Patriarch of Jerusalem Sophronius in the spring, Honorius in October, Sergios in December.

Honorius no longer received the ecthesis. After his death, his successors, especially John IV , turned against monotheletism. John IV tried to defend Honorius, but as a result the opponents of the doctrine gained the upper hand. It was condemned as heresy at the Synod of 649, still prepared by Pope Theodore and led by his successor Martinus , and at the Synod of Constantinople in 680/81. In the session of March 28, 681 the resolution was passed and the anathema , the ban from church, was imposed on all supporters of monotheletism . Honorius I was also solemnly cursed and his writings were burned. Several popes, such as Leo II , later confirmed the anathema. This anathema was a main argument against the dogma of the Pope's infallibility in the discussions surrounding the First Vatican Council of 1870. Catholic sources point out that Honorius I personally thought orthodoxy, let alone taught ex cathedra monotheletically, and that Leo II ... expressly excluded the accusation of heresy from his approval of the Third Council of Constantinople and changed the justification for the anathema to "yielding to heresy".

Commons : Honorius I.  - Collection of images, videos and audio files