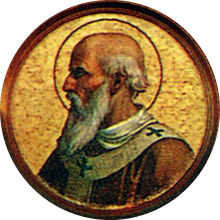 Leo II, depiction in the Basilica of Saint Paul Outside the Walls

Leo II was a Greek from Sicily. The Greek language and literature were so much forgotten in Rome at that time that their knowledge was considered something extraordinary and the Greek and Latin speaking Pope was considered a miracle of learning. He was Agatho's successor . On the sixth ecumenical council (in Constantine Opel 680 - also: Third Council of Constantinople Opel ) became Pope Honorius I for his views in Monothelitism -Disput as a sympathizer with heretics with excommunicationoccupied. This took place under the time of Agathos, but still had an impact on Leo II, who from then on supported the decision and justified the condemnation of Honorius I with writings. He saw in Honorius I. “profana proditione immaculatem fidem subvertere conatus est.” (Something like: someone who has tried to destroy the pure faith by ordinary betrayal .) With the thought of papal infallibility , his words became a dispute of their own. In particular the Greek text to the emperor shows a different, milder phrase in which the term “subverti permisit” is used instead of “subvertere conatus est”, i.e. H. the accusation was that a heresy was permitted instead of actively spreading.

Leo was elected to succeed Agatho in January 681, but was not consecrated until August 17, 681. However, his inauguration was delayed because Emperor Constantine IV delayed approving his election until the end of the Third Council of Constantinople (November 7, 680 to September 16, 681). An exchange of letters with Emperor Constantine IV and letters to bishops, a count and to Ervigius, King of Spain have been preserved from Pope Leo II.

In the history of Councils (iii, 294) by Karl Joseph von Hefele , this is assumed to be the true understanding of Leo II. During the pontificate of Leo II, the dependence of the See of Ravenna on that of Rome was finally enshrined in an imperial edict.

Pope Leo II was canonized. His Catholic feast day is July 3rd, the day of his death.