The Danny's Pan was an important folk -Club in Hamburg . 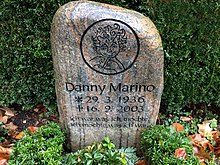 The club was opened in Hamburg-Eimsbüttel in 1962 by Danny Marino , the "ambassador of French chanson" in Hamburg. In 1966 he moved into the basement of the Leder-Schüler office building on Heidenkampsweg in Hamburg-Hammerbrook . Fabio Mezzasalma, the youngest brother of Danny, ran the club and was supported by his girlfriend Colette and "Max" Massimiliano Federici. The club became the Mecca of the Hamburg folklore movement. Danny sang songs by Georges Brassens and Jacques Brel in German, he was also a role model and teacher for many young musicians who performed with him. Among them were Reinhard Mey , Alexandra , The City Preachers with Inga Rumpf , Klaus Hoffmann , Udo Lindenberg , Hannes Wader and Abi Wallenstein . The pop and folklore singer Rebekka had her first appearances in the Hamburg folklore club. Even Mike Kruger and Otto Waalkes celebrated their first success in "Danny's Pan". No less successful in the 1960s were Lee Bach, Elga, Klaus, who sang funny German songs, Eckart Kahlhofer ("Abjestrappst", "Das Maikäferchen", etc.), the blueser Tiny & Uli, Zwem (who wrote the memorial program on NDR about the Danny's Pan helped organize in 2004), Wolfgang, Grit Damian, a skiffle group and many others.

Branches were established in Berlin, Düsseldorf and Munich. Today the club “Shake!” Is located in the rooms of the former “Danny's Pan”.