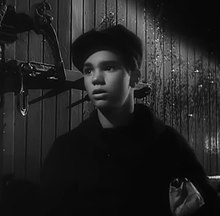 Born in Los Angeles, Darryl Hickman made his film debut in 1937 in the Prisoner of Zenda alongside Ronald Colman and Madeleine Carroll . After a few minor roles, Darryl got his first more substantial part in Roy Del Ruth's musical comedy The Star Maker in 1939, opposite Bing Crosby . The following year he appeared as the younger brother of Henry Fonda in John Ford's classic film The Fruits of Wrath , based on the novel of the same name by John Steinbeck . In the 1940s, Hickman had numerous supporting roles in high-profile films, including with Mickey Rooney in Das sind Kerle (1941) and And Life Goes On (1943). In 1945, in the film noir Mortal Sin , Hickman played a handicapped boy whom Gene Tierney played by femme fatale drowned in cold blood in a scene that had become famous.

Hickman made the leap to youth actor in the late 1940s with films like Ring Free for Stoker Thompson . He has also been heard regularly on the radio, including a recurring role in the popular series Meet Corliss Archer . In the early 1950s, he briefly joined a monastery and was also active in the Korean War , but continued his acting career. Among other things, he played guest roles in numerous television series and was in films such as Scream when the Tingler comes and seen differently from the others . When film offers waned, Hickman switched to working behind the camera in the early 1960s. He worked as a television producer for CBS , where he was temporarily director of the daily program.

Until the late 1990s, Hickman occasionally took on supporting roles in film and television productions, such as in Sidney Lumet's Oscar-winning classic Network . As an acting teacher, he has taught in New York, including at the Actors Studio , and in Hollywood. In 2007 he published the book The Unconscious Actor, Out of Control, In Full Command , in which he explains his ideas about convincing acting. To this day, Hickman appears in documentaries or at film festivals.

His brother Dwayne Hickman , who was three years younger than him, also came to film as a child, and they appeared together in two films. From 1959 until the divorce in 1982 he was married to Pamela Lincoln, they had one child. His second marriage is to actress Lynda Farmer Hickman.