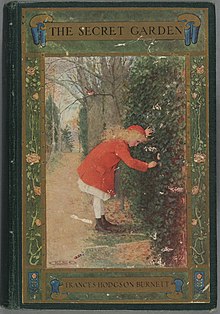 Mary Lennox is raised by a nanny in India . Disregarded by her parents and very spoiled by the servants, she grew up there. When a cholera epidemic breaks out, Mary's parents and nanny both die. Thereupon she is taken to her uncle and current guardian Mr. Archibald Craven on his estate "Misselthwaite" in England .

She makes the trip from London to Misselthwaite in the care of a woman named Mrs. Medlock, the housekeeper at Misselthwaite Castle. It becomes apparent that Mary's dislike of her is mutual.

Mary's uncle behaves in a similar way to her parents: he is seldom home, shows no interest in her, but makes sure that she has everything she needs. Martha, the maid, is supposed to take care of Mary.

Since there are no toys and since Mary cannot find the large library in the huge house, the only option left is to play outside. The fresh air is good for her, and the initially sickly, ugly, and selfish girl gradually turns into a pretty and friendly creature.

One day while walking around in the garden, she discovers a locked and overgrown gate in a wall. Behind it is a secret garden that has been locked for ten years. Mr. Craven had put it on with his now deceased wife; after their death he had it locked up and run wild. But Mary secretly takes care of her secret garden together with Dickon, Martha's brother.

On a stormy night she discovers her cousin Colin, the son of Mr. Cravens. Because everyone believes the boy will soon die, his every wish has been granted and the servants do as he orders. He has become a spoiled kid that his father doesn't want to know about because he reminds him too much of his beloved, late wife. Mary makes friends with him, but also gives him her opinion.

With the help of Mary, Colin learns to walk; until now it was believed that the boy was paralyzed. Mary tells him about the secret garden and he wants to see it.

In the garden all three (Mary, Colin and Dickon) frolic around, take care of the plants and do gymnastics; but in the house Colin plays the terminally ill because he wants to surprise his father with his progress in walking on the return of one of the trips he is currently on. Finally, Mr. Craven returns from a long trip to Misselthwaite because of a dream and a letter from Dickon's mother. He meets his son in the garden and they both go back to the estate together.

The book was filmed several times.

Other films called The Secret Garden do not refer to the novel by Frances Hodgson Burnett. The film adaptations from 1949 and 1993 are regularly repeated on German television's Christmas programs.

The British band Depeche Mode released a song called A Secret Garden in 1982 , which can be found on the album A Broken Frame . According to band member Martin Gore, the song pays homage to the book of the same name.

In 1991, The Secret Garden was adapted as a musical. The text , which won a Tony Award , was by Marsha Norman , the music by Lucy Simon . The production ran 709 performances on Broadway between 1991 and 1993.