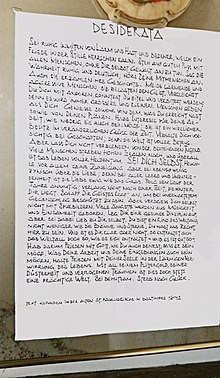 The text of the Desiderata hangs in many churches, here in the Chapel of the Holy Family in Scherstetten, Bavaria

Desiderata , also known as the Baltimore Rule of Life , is a prose poem by the American lawyer Max Ehrmann from 1927.

The title literally means (from Latin desiderare , “longing”, “wanting”) “the longed for” or “longed for things”.

The author Max Ehrmann (1872-1945), a lawyer of German descent from Terre Haute , USA , applied for the copyright for this poem on January 3, 1927 , but his descendants lost it in a lawsuit in 1976 because it was published in the 1940s without a copyright notice had been. The poem has since been in the public domain . Chronologically, this is the first verified source of the poem's origin.

In 1933 Ehrmann used Desiderata as part of the Christmas greetings to his friends. In 1948, three years after the death of her husband, his widow published a volume of poetry entitled "The poems of Max Ehrmann", published by Bruce Humphries Publishing Company , Boston.

Frederick Ward Kates, who was rector (pastor) of Old St. Paul’s (a church in Baltimore) from 1956 to 1961 , published Desiderata in a collection of his parish letters in 1959 in the book "Between Dawn and Dark". The correct copyright information can also be found here. On the cover of this book is, as is usual with such publications, the name of the church and the year it was founded, in this case "From the Old Saint Paul's Church, Baltimore, 1692" ("from the old St. Paul's Church, Baltimore 1692"). From this it was wrongly concluded - and it is still rumored as Urban Legend - that there was an inscription in this church and that this wisdom came from ancient times. Due to this false assumption, the text was also viewed as a public domain and was duplicated millions of times.

When the politician and former US presidential candidate Adlai Stevenson died in 1965, a copy of the Desiderata was lying on his bed. This made the text immensely popular - especially since Adlai Stevenson played an important role during the Cuban Missile Crisis .

The poem reflects the attitude towards life and the philosophy of life of the hippies and the " make-love-not-war " movement of the 1960s and was thus widely spread. Today it is often found as a motto on everyday objects and in collections of quotations.

In 1968 Leonard Nimoy took on the poem and published it under the title "Spock Thoughts". The US radio announcer Les Crane reached number 8 on the Billboard Magazine charts in 1971 and received a Grammy ("Best Spoken Word Recording") in the same year for his recording of the text with music. In German, this chant version was recorded under the title “Desiderata (Where Love Ways)” with a German text by Günter Loose, also recorded in 1971 by Friedrich Schütter and published on his LP “Ein Mensch”.

There is a setting by the neoclassical band In The Nursery under the title "Always" (Duality, 1992).

This poem in Polish translation with music by Piotr AA Walewski was popularized by the cabaret Piwnica pod Baranami from Krakow / Poland and has been performed several times a week as one of the hymns of this renowned theater formation since the eighties of the last century. In this form it was also adopted into the repertoire of various school choirs in Poland. Various live recordings can be found under "Dezyderata" or "Piwnica pod Baranami" on YouTube.

The Polish journalist Marian Sworzeń published a book with the original title "Dezyderata, dzieje utworu ktory stal sie legenda" ( ISBN 83-7278-102-8 ) in 2004 , in which he deals in detail with the origin of this poem and its musical Versions dealt.