Digital Mobile Radio (DMR) to German: Digital Mobile refers to a transmission standard for voice and data in non-public radio networks , such as in mobile radio and in the area of the Amateur Radio Service .

DMR was adopted as a standard by the European Telecommunications Standards Institute (ETSI) in 2006 (ETSI EN 300 113 Part 2). The manufacturers and suppliers of DMR systems and accessories have come together to form the DMR Association.

Technically, DMR offers full duplex transmission and works with the time division multiplex method. Although no fixed vocoder is specified in the ETSI standard , Advanced Multi-Band Excitation (AMBE +) is usually used for coding audio data in DMR . A gross data rate of 9.6 kBit / s is achieved for data transmission and occupies a bandwidth of 12.5 kHz. The modulation on the radio channel is frequency shift keying (FSK) with four different frequencies (4FSK), the timing of the time slots is asynchronous, as there is no central instance for synchronization.

A competing process is dPMR , which uses the FDMA frequency division multiplex process and, with a bandwidth of 6.25 kHz, only occupies a third of the previous bandwidth of 20 kHz (ETSI EN 301 166 Part 2).

These two procedures are particularly topical due to a new regulation by the US Federal Communications Commission . Due to a lack of free channels, new radio applications will only be approved in the USA if they use a maximum bandwidth of 6.25 kHz per speech path. With dPMR this is exactly the carrier bandwidth; with DMR with its two time slots on a 12.5 kHz carrier, one speaks of the 6.25 kHz equivalent. 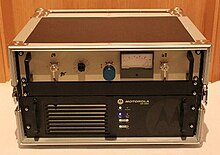 DMR is also used in the amateur radio service. Commercially available DMR devices are programmed by radio amateurs for use in the amateur band . Worldwide there are over 700 DMR relays, mainly in the 70 cm band , some also in the 2 m band and connected via IP Site Connect.

There are three networks in amateur radio: the DMR-MARC ( Motorola Amateur Radio Club ), the Hytera network and the DMR BrandMeisternetz . The DMR-MARC network is the older network and is based on Motorola Mototrbo repeaters. The Hytera network is based on repeaters from Hytera. The radios from all manufacturers are compatible with both networks due to the ETSI standardization.

The software for networking the Hytera DMR repeaters is written by radio amateurs. This allows amateur radio-specific functions to be integrated in the DMR network. This includes the use of reflectors, based on the D-STAR DCS model, as well as the option of reporting the position to APRS servers using GPS- enabled radios.

The radio amateur is assigned an ID in an international database according to the guidelines of the Mobile Country Codes . This can be displayed in the devices via address books with amateur radio call signs and names.

Since the main application of DMR comes from commercial radio, it is not intended to make the frequency and talkgroup selection directly on the radio. Prior programming on the PC and a programming cable are required for this.

Classification compared to other radio standards

DMR was established by ETSI as the successor to analog professional radio networks. In the existing (licensed and license-free) frequency bands , better communication, noise-free transmission as well as higher data rates and additional service features should be enabled. Compared to analog frequency-modulated radio, DMR doubles the number of channels with the same bandwidth of 12.5 kHz with two voice channels.

The Federal Network Agency ( BNetzA) grants frequency permits for frequencies in the 2 m VHF band and in the 70 cm UHF band that have been kept free for this operating mode.

Compared to TETRA , DMR requires lower investments and, due to its simpler structure, lower maintenance costs and offers a certain degree of compatibility with existing radio systems. DMR radio systems and systems are suitable for a variety of applications and can be used for smaller local corporate radio solutions up to large radio networks. Users are, for example, municipal utilities, public transport companies and energy suppliers, as well as road construction authorities and motorway services.

The mixed mode enables switching between analog radio in the 12.5 / 20/25 kHz grid and digital radio in the 6.25 kHz grid. The devices are, so to speak, "backwards compatible". In contrast to TETRA, it is possible to work with analog devices on a different channel . Some repeaters can also support both standards (one after the other) on the same channel - the repeater answers in the operating mode in which it is called.

The higher system availability in the event of a power failure ( blackout ) is seen as an advantage for DMR compared to public cellular networks .

DMR Tier I is intended for hobby use. The usual technical restrictions apply as for PMR446 devices, i.e. H. Permanently attached antenna, maximum radiation power of 0.5 watts and use of generally assigned frequencies. However, they are free of usage fees.

DMR Tier II is intended for professional radio applications. As in analog radio, every company operates its own devices in intercom (DMO), i. H. without external infrastructure or in two-way communication (RMO) via relay stations (BTS - Base Transceiver Station). Networking the repeaters (BTS) - also known as IP-Site-Connect - also enables supraregional radio networks with DMR Tier II to be implemented. For companies, for example, several buildings can be supplied, for local transport companies entire regions or, as with amateur radio, worldwide networking of all DMR repeaters / BTS. This networking can (depending on the situation) be implemented via wired DSL, satellite DSL, UMTS or directional radio. DMR Tier II is also generally referred to as “conventional DMR”.

DMR Tier III or DMR trunking / DMR trunked radio (TMO - Trunked Mode Operation) describes larger radio networks with one or more base stations and IP networking, whereby several physical frequencies can be served simultaneously at each location. This makes it possible to increase the capacity of the respective radio cell / BTS, so that a large number of calls can be switched simultaneously via the BTS. DMR Tier III should therefore be seen as an alternative to the TETRA radio standard.

Manufacturer variants . Since the implementation of TIER-III is very extensive, most manufacturers have their own variants that are based on TIER-II. Motorola refers to its additions as Capacity Plus or Linked Capacity Plus. However, they are then only compatible with themselves. Such networks are not accessible to third-party devices. By analogy, Hytera uses XPT (Extended Pseudo Trunk).