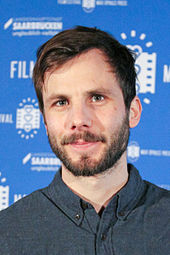 Dominik Hartl (* 1983 in Schladming ) is an Austrian filmmaker. Hartl received a nomination for Best Short Film at the Austrian Film Prize 2014 for his film Spitzendeckchen . In addition, the film, like when it gets cold , was shown in the short film competition of the Max Ophüls Preis film festival .

Hartl studied directing and screenwriting at the Vienna Film Academy and completed his bachelor's degree with the film Spitzendeckchen in spring 2012. In addition to being nominated for the Austrian Film Prize, the film was also nominated for the short film festival in Landshut.

In addition to his work as a filmmaker, Hartl also worked as an art director at an Austrian advertising agency and is involved in several music projects, where he plays clarinet, saxophone, bass guitar and synthesizer.