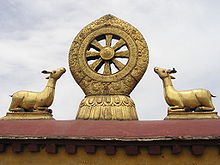 The most important tradition for the Noble Eightfold Path is the 22nd discourse of the Buddha in the Digha-Nikaya of the Pali Canon , the Mahāsatipatthāna Sutta on the Fundamentals of Mindfulness (D 22).

The eightfold path or way is composed of the following eight parts or links:

These eight members are contained in the three groups “wisdom” ( paññā ; first and second parts), “morality” ( sīla ; third to fifth parts) and “deepening” ( samādhi ; sixth to eighth parts). All members are preceded by the adjective "sammā", which means something like "right" or "perfect". Buddha's path is a middle path that avoids all extremes. The first two links relate to thinking and disposition (motivation). For a Buddhist, doing does not begin with the act; the preparations for an act always take place in the mind, whether consciously or unconsciously. Sections three to five relate to moral behavior, and the last three sections are about mental training, access to the spiritual dimension.

The term "path" is not meant here in the sense of a linear progression from level to level: all components are of equal importance and should therefore be observed and practiced by a Buddhist at all times. Furthermore - according to the doctrine of not-self - there are many cross-connections and mutual dependencies among the individual path members. For example, “right speech” belongs to the area of ​​“right action” and “right action” is only possible in connection with “right mindfulness”. “Right concentration” in turn also trains “mindfulness”.

Perfect wisdom (skt. Prajna , P. paññā) is the goal of the Buddhist knowledge process, which leads from ignorance ( Avidya ) to awakening ( Bodhi ). The two members of this group point to beneficial knowledge and a beneficial mindset.

Right disposition is the decision to renounce , not to harm, to abstain from resentment (D 22). Right thinking is without greed, hateful in disposition and generous (A 10.176).

The morality group contains precepts ( sīla ). They name behaviors that are beneficial (kusala) according to the karma principle. Vicious behavior is unwholesome (akusala) and causes suffering ( dukkha ). In a broader sense, this group means renouncing evil deeds.

Right speech avoids lies, denial, insult and gossip (D 22, A 10,176). Like thoughts, speech is wholesome or unwholesome, useful or useless, true or false. A word of good conduct is "when it is spoken at the right time, when it is true, polite, purposeful, and comes from a loving disposition."

Right action avoids killing, stealing and sensual debauchery (D 22; A 10,176). In a broader sense it means a life according to the Five Silas , the precepts of Buddhism.

Right (life) change means renouncing an unjust way of life (D 22). Specifically, five types of activities are named which a Buddhist lay follower should not do and which he should not induce others to do (A 5,177): trade in arms, trade in living beings, animal breeding and trade in meat, trade in intoxicants, trade in poisons.

In a broader sense, right livelihood means doing a job that does not harm other living beings and that is compatible with the Noble Eightfold Path. In addition, it means that no matter what you do, you always work with the thought in mind that you should not only keep the money for yourself but also share it with others.

A concentrated mind ( samādhi ) is the goal of these members of the Noble Eightfold Path. They describe the path to training the mind, especially meditation . In addition, this group is understood in a broader sense to mean the performance of good deeds.

Right striving or right attitude describes the will to control and curb affects such as desire, hatred, anger, rejection etc. in perceptions and experiences. As with "right thinking", this is about examining one's thoughts and exchanging unwholesome thoughts with wholesome thoughts: "... when evil, unworthy considerations arise, images of greed, hatred and delusion, gain another idea from this, a worthy picture ... "

Right mindfulness concerns the body first: becoming aware of all bodily functions such as breathing , walking, standing, etc .; Becoming aware of all sensory stimuli, affects and all thinking contents. They should be made fully aware without wanting to control them. Mindfulness of the “inside” examines the mental impulses and names them. It is about becoming aware of the constant flow of feelings and states of consciousness. Mindfulness of the “outside” causes one to be fully in the here-and-now, not to brood over the past and not to indulge in the future. That also means being completely with a thing or person that you are confronted with at the moment, or in a conversation that you are having.

Right concentration (sammā samādhi) denotes the ability to control the restless and wandering mind. Often referred to as the one-pointed mind or the highest concentration, it is a central part of Buddhist spirituality . In order to get the right collection, the Buddhist schools have developed many methods and techniques. This is essentially a Buddhist meditation that mainly uses the concentration on a single phenomenon (often the breath), whereby the mind is freed from thoughts and comes to rest.

Translation of the term sammā

The use of the term “right” to identify the individual path members represents a translation of the Pali word samma . Most translators - such as Karl Eugen Neumann , Nyanaponika , Kurt Schmidt, Wilhelm Geiger , Klaus Mylius , Ajahn Buddhadosa - are aware of the translation of sammā by “right” in agreement. In the "Lexicon of Eastern Wisdoms" it says:

“Lama Govinda renders sammā as 'perfect' in order to do justice to the original meaning of the word in the sense of 'wholeness' or 'completeness'. The term sammā does not indicate the contrast 'right-wrong', as could be mistakenly assumed in German when translated by 'right'. "

This is immediately evident when one translates sammā in the worship formula “sammā sambuddhasā” as “the completely or completely enlightened one”. Hence the translation “perfect decision” can be found.

Associated source texts from translations of the Pali Canon :