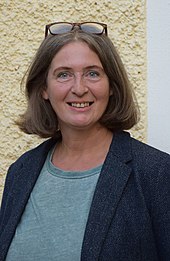 Elke Kahr (born November 2, 1961 in Graz ) is an Austrian politician of the Communist Party of Austria (KPÖ). She has been a city councilor in the Styrian capital Graz since 2005 and was the deputy mayor of Graz from June 2016 to April 2017.

In the municipal council election in Graz in 2021 , Kahr and her party KPÖ overtook the list of long-time mayor Siegfried Nagl ( ÖVP ), who subsequently resigned, and took first place. Since the party with the largest number of seats in the municipal council has the right to propose the new mayor to be elected, Kahr is now being treated as the likely new mayor of the provincial capital of Graz. In a ZIB-2 broadcast on the evening of September 27, 2021, Kahr confirmed her interest in the office of mayor.

Elke Kahr was adopted at the age of three, grew up in a working class district and, after finishing elementary and secondary school, attended the commercial school in Grazbachgasse . After working at the Oesterreichische Kontrollbank , she attended the evening business academy , which she graduated in 1984 with the Matura .

Member of the KPÖ from 1983, Kahr has been employed in the KPÖ district management in Graz since 1985. In 2003 and 2004 she was Deputy Federal Chairwoman of the KPÖ, and in 2005 she worked as a campaign manager in the Styrian state elections. Elke Kahr was a councilor from 1993 and has been the club chairwoman of the Graz KPÖ since 1998. She is active in numerous citizen, social and peace initiatives, especially her work in the tenant emergency call is popular in Graz. From 2005 to 2017 she was councilor for housing affairs.

In the Graz municipal council election on November 25, 2012 , your party came second with almost twenty percent, which was a unique result in Austria. Kahr was almost able to build on the successes of her political predecessor Ernest Kaltenegger .

After the resignation of the previous Vice Mayor and Social Councilor Martina Schröck (SPÖ), Elke Kahr was elected as the new deputy mayor with 38 out of 46 votes cast in the local council.

Kahr donates a good two thirds of her monthly net salary as a city councilor to charity and has thus donated a total of around 900,000 euros during her term of office.

Elke Kahr has lived in a partnership with the former KPÖ state party chairman Franz Stephan Parteder since 1988. The couple has a son.