Emanuel Brunswick (* between 1830 and 1840 in Bremgarten , Switzerland ; † December 15, 1892 in Chicago , USA ) was an American entrepreneur of Jewish-Swiss origin and half-brother of the Brunswick Corporation founder, John Moses Brunswick .

Since John Brunswick's mother died shortly after his birth (1819), the father married again. This marriage has at least one daughter and several sons, including Joseph, Emanuel, David, Hyman and Solomon. John emigrated to the USA in 1835; all of his half-siblings later followed him. When David and the young Emanuel arrived in the USA, they initially worked in John's billiards manufacturer “J. M. Brunswick Manufacturing "in Cincinnati , Ohio . But soon John was ready to expand his company, so in 1848 he sent his brothers to Chicago , Illinois to begin opening a new sales office.

Joseph, the eldest of John's stepbrothers, was very ambitious and so he didn't want to be just an employee of John's. After discussions with his brother, the company was renamed “JM Brunswick & Bro” in 1855, and then after Emanuel's entry in 1866 into “JM Brunswick & Bros.”.

It went well for many years until around 1859. Then, apparently without warning, Emanuel decided to go "solo" and "do his own thing". Coincidentally, that was also the year Emanuel married his wife Louisa.

Emanuel went " all in ". He teamed up with John Monroe and his brothers from Aurora, Illinois , built his own manufacturing facility in Chicago, and optimistically they named it:

It was almost as if Emanuel was trying to outdo John, and according to Billiard Magazine writer AL Hardy testimony:

... the new company Emanuels laid the foundation for a "rivalry that dragged on for a dozen years or more, led to bitter controversy, and what Chicago's billiard circles have never seen in this way ..."

It is not clear whether the identity of his wife's name with John's wife had something to do with it.

It is unclear whether John and Emanuel had squabbles or whether the demand for pool tables at the time was so great that John could not meet it alone. The only reliable information ever found on the subject suggests the latter. On the other hand, however, the tax records at the time seem to contradict the "overwhelming" demand theory.

A few years later (1873–1874), John merged with his former Ohio competitor Julius Balke and created the “JM Brunswick & Balke Co.”. Emanuel, like a copyist, did the same and allied himself with one of his strongest local competitors, "Stephanie, Monheimer & Hart". They called their new conglomerate: "Brunswick Brother Stephanie & Hart Co.". 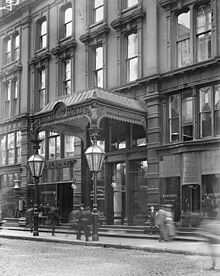 John's company was doing well, whether or not he had help from his brothers, it was Emanuel who appeared to be struggling with economic stability. Maybe because of the sagging profits or maybe because of the search for new sales areas. In about 1879, Emanuel gave control of the company to his brother Joseph and sons Charles and Benjamin, and he and his wife moved to San Francisco. The strange thing is that when Emanuel moved to California , he appeared on the Francisco Directory as a sales representative for John's company, JM Brunswick & Balke Co. ” Apparently the arguments between him and John weren't that bad.

Emanuel worked for his stepbrother on the west coast until around 1884. He changed his plans again, distancing himself from John's company and opening his own factory in downtown San Francisco . But as luck would have it, bad luck in this case, the great Chicago fire of 1871 burned all of it to the ground. The losses were huge and the brothers' Brunswick 3-party partnership officially went up in smoke. Both John and Emanuel began rebuilding independently, opening a new chapter in Brunswick history. John took advantage of the fact that his Ohio facility was still intact and was continuing to produce goods as quickly as humanly possible. Emanuel recruited his brothers (but not John?). However, he was forced to completely rebuild his company.

Business in San Francisco was not going well for Emanuel, even after moving to his company, practically across the street from Brunswick Balke Collender & Co. So he took his chance on a trip to Central America, looking for a way to turn things around. But even that didn't seem to help in his situation - according to a newspaper report, he almost went broke during the process.

A year later, in early December 1892, Emanuel went on a trip to Chicago. With the coming of the world exposition in Chicago the following year, he wanted to secure some sort of branch office during the event. Moses Bensinger , then president of "Brunswick Balke Collender & Co." and John's son-in-law, later said in a newspaper report that Emanuel came to town to (once again) a position between him and "Brunswick Balke Collender & Co." search. Emanuel was traveling with a business partner and they booked a room in one of the most luxurious and famous hotels in Chicago, "The Palmer House".

On Thursday, December 15th, at around 8 p.m., Emanuel had a meeting at the hotel with his partner and travel companion, JE McDonald . Then, shortly before 9 pm, he left the hotel walking north to State Street on the way to Randolph Street for dinner at the legendary Henrici's restaurant. However, he never got there.

On the way to his dinner at the "Henrici" it only made it to Madison Street where he stepped from the sidewalk onto the street to cross the intersection when the cable car around the corner caught him. Apparently he was looking the other way and didn't see the cable car until it was too late. A witness recalled Emanuel stretching out his arms to mitigate for the effects of the impact, but it didn't help much. The force of the impact broke his ribs and knocked him to the ground. It got caught on the car and was dragged around the corner before it stopped there. Emanuel died about 1 hour later (10:00 p.m.) in a doctor's office near the accident. One of the broken ribs had pierced his heart.

In the coroner's report, the following personal items of the deceased were recorded:

Emanuel's funeral took place at his family home on Michigan Avenue, Chicago, about noon on December 21, 1892. He was buried in the Jewish Mount Mayriv Cemetery in Chicago without ever returning to California. His tombstone points westwards, that of his wife Louise († 1920s) northwards. Both stones are made of sandstone and are badly weathered, so that the life data can no longer be read in full.