Euthalia aconthea is a butterfly ( butterfly ) from the family of Nymphalidae (Nymphalidae).

The wingspan of the moth is 50 to 75 millimeters. The species is characterized by a slight sexual dimorphism . In the males the area of ​​the upper side of the wing is dark brown, in the females it is lighter brown and shimmering green. Both sexes have a white band of spots in common, which extends from the front edge to the middle of the disk region . Brown spots near the front edges are bordered with thin black. The pattern on the upper side shines through on the ocher-colored underside of the wing. 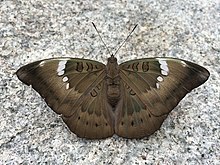 The egg is green in color, has a hemispherical shape and has thorns on the surface like a sea ​​urchin .

The caterpillars are colored green. The back line is whitish. In the resting position, the caterpillar sits exactly above the central rib of a leaf, with the light back line exactly tracing this central rib, which means that it is hardly visible to potential predators from a distance. The entire surface of the body is provided with thorns from which long stinging hairs extend. When moving, the caterpillar acts like a bobbing branch covered with needle leaves or thorns, which in turn makes it difficult to see.

The doll has an angular shape that ends in two points at the lower end. It is colored green, shows a brown-rimmed red spot in the middle and is attached to branches, trunks or leaves as a falling doll with a webbing anchorage. Shortly before the moths hatch, they turn black-brown.

The species occurs in India , Sri Lanka , Thailand , Malaysia and Singapore as well as in southern China and on Bali , Borneo , Java , Sumatra , Lombok , Sulawesi and the Philippines . 23 subspecies are currently classified in the individual occurrence areas . Euthalia aconthea primarily inhabits forests with mango trees ( Mangifera ). It can sometimes occur as an agricultural pest in mango plantations .

The moths occasionally suckle on damp places in the earth, fruit, excrement or cadavers in order to absorb fluids and minerals. The eggs are deposited individually on the top or bottom of the food plant. The caterpillars prefer to feed on the leaves of mango ( Mangifera ), cashew ( Anacardium ) or belt flower species (Loranthaceae).