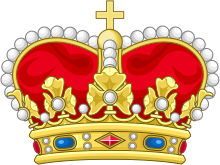 Schematic drawing of a princely crown

The prince's crown is one of the crowns of rank . It is used in heraldry by princely families in the coat of arms . It is essentially similar to the prince's hat , but is to be distinguished from it.

In heraldry , it is of minor importance whether the coats of arms of the royal houses are depicted with the royal crown or the princely hat . The decision about this lay or lies with the bearer of the coat of arms and was and is a question of tradition and liking.

The prince's crown has a golden ring with inserted precious stones . There are five leaf prongs on the hoop, of which three stirrups are visible. These enclose a purple cap on which a blue orb is placed. The orb is not always present.

In the 19th century the ducal crown with five bows and a closed crown lining was preferred in its place by the houses actually ruling a principality in order to distinguish themselves from the mediatized princes or the unequal titular princes without government office. There were differences from country to country. See the article Crown of rank . German, Russian and Danish "high honors" ( salutation for the prince ) led the prince's crown.