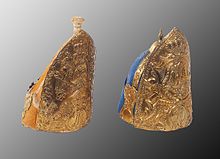 Prussian fusiliers with the fusilier hat

The fusilier hat is a historical military headgear .

The fusilier hat was typical of the Prussian army from 1723 to 1790 as well as for the armies of various states of the Holy Roman Empire that followed the Prussian uniform style.

It consisted of an upright bare metal front shield, embossed with embossed ornaments and national emblems . This shield was similar to that of the Prussian grenadier caps , but was slightly lower.

In contrast to the grenadier hats, the rear part was not designed as a cap pouch attached to the shield, but as a bell pressed from felt and covered with cloth, which was crowned by a stylized metal flame as a tip. The bell was free-standing and only connected to the cap shield at the lower edge.

The Füsiliermütze to has been issued Fusilier - regiments . Since these generally had a reputation for being inferior to the musketeer regiments, their reputation was to be enhanced by the headgear that resembled that of the grenadiers , who were considered to be elite . The infantry regiments set up during the reign of Frederick the Great were almost without exception fusilier units , which made the fusilier hat very popular in the Prussian army.

In 1787 the fusilier hat was replaced by the Kaskett in Prussia and subsequently also disappeared from the other armies dressed according to the Prussian model.

In the Saxon army, the grenadiers wore headgear in the style of the Prussian fusiliers during the War of the Austrian Succession, but in the middle of the 18th century received a bearskin hat with a shield based on the Austrian model.

In Great Britain, the Füselierregiments ( The Royal Fusiliers (City of London Regiment) , Royal Scots Fusiliers , Royal Welch Fusiliers and others) received fur hats that were also slightly lower than the grenadier hat in the course of the 19th century. While the officer's hats were made of bear skin, the hats of the teams were made of raccoon skin.

In the Army History Museum in Vienna , the three Silesian Wars and the Prussian Army at the time of King Frederick II are documented in detail. These include several very well-preserved, original grenadier and fusilier hats.