Color separation (literally color separation) refers to the calculation of individual (separated) printing inks , mostly in prepress . Before digitization , color separations with color filters were produced using a photographic method. Color separation is necessary because color information is usually not available in the form in which it is needed for printing. The four-color printing is usually carried out in the CMYK color model ( color mixing of the individual colors Cyan , Magenta , Yellow and Black ). The color data, on the other hand, can be available as composite color channels, in the RGB model , as special colors (such as Pantone , HKS , RAL ), other color definitions or as a non-digitized image.

The different ways of mixing colors result in files with different color information.

The transfer of additive to subtractive is relatively simple. This color separation is only complicated by the use of black in the CMYK color model.

Black is used as an additional color in printing in order to save costs and - due to the associated loss of quality - to increase the impression of sharpness : 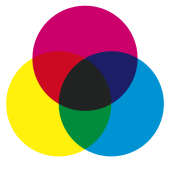 By using black, the inexpensive printing of a pure black tone should be achieved.

Various methods have been developed in printing technology to improve all of the problems mentioned (costs, print quality ...):

Each of the methods described requires a special color separation.

The color separation is carried out automatically by programs such as Adobe Photoshop or layout programs such as QuarkXPress or Adobe InDesign based on the color settings of the programs. This separation can also be done with special programs in the PDF . The existing standard settings of these programs meet average quality expectations. In the case of particularly demanding print files, only the experience of specialists can guarantee the necessary quality.

Before the invention of the glass engraving grid in 1881, color separations were made manually. In 1837 the Franco-German lithographer Godefroy Engelmann patented a colored variant of lithography under the name Chromolithography (color stone printing , color lithography), which was to be the most popular method for high-quality color illustrations until the 1930s. Chromolithographs consisting of up to 12, 16 and even 25 colors were not uncommon. The experienced chromolithographer started with the light colors and had them printed in the proof press. Depending on the progress of the work, he recognized in comparison with the original image what the next darker color plate, i.e. the color separation, had to look like. A 12-color chromolithography could, for example, consist of the following color extracts: blue I, red I, yellow, blue II, red II, brown I, brown II, blue III, red III, gray I, gray II, black. The lower digits indicate the lightest colors.

At the beginning of the 20th century, the Klimsch & Co company developed a reproduction camera with which two-dimensional templates could be reproduced exactly. This camera was significantly larger than the traditional studio or handheld cameras and could fill a large space. Maxwell had developed the filter technology for color separations as early as 1861 and Georg Meisenbach followed in 1881 with the invention of the glass engraved grid. This created the prerequisites for the use of photography in repro technology.

The repro photographer created color separations from a colored template using color filters . A four-color printing requires each one color separation for yellow, red, blue and black. The repro specialist calls these colors yellow or yellow, magenta , cyan and depth or black . During exposure, a color filter is placed upstream in the lens that corresponds to the complementary color of the color separation, i.e. a violet filter for yellow, a green filter for red and an orange filter for blue. Black, which is only used to increase the contrast, is recorded without a filter. In order to be able to print the color separations, a division into raster points is necessary. This rasterization also takes place in the reproduction camera by placing the glass engraving raster in front of the photographic plate or film to be exposed.