This article deals with the deity Forseti; for the band of the same name, see Forseti (band) .

This article or section needs to be revised. Please help to improve it , and then remove this flag. 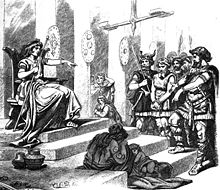 Forseti is one of the Aesir family , son of Balder and Nanna . His residence is the Glitnir (Glastheim) hall, gleaming with gold and silver , where, as the highest judge of Asgard , he speaks justice every day among gods and people .

Excerpt from the Grímnismál :
Glitnir is the tenth; The silver roof of the hall
rests on golden pillars
.
Forseti is enthroned for the long day
and settles all disputes.

The Thing meetings are often dedicated to Forseti and Tyr , with Forseti being more of a mediator of a conflict. Tyr, who mostly advocates the argument and the fight, faces Forseti as a moderator between two parties. Forseti primarily sees the good in people and ensures that laws and rules are observed in the state or in families and communities. As the son of the god of light, Forseti is not only a mediator who only insists on peace, he also sees a dispute as a purification, after which something new will arise if both parties mutually accept peace. A difference can only be settled by both parties to the dispute and not just by one.

According to the Christian legends of saints by Willebrord and Ludger, there was a sanctuary of the Frisian god Fosite on the island of Fositesland, a source from which was drawn in silence, whereby it is assumed that the island of Helgoland is meant. The holy cattle of Fosites grazed here and no one was allowed to slaughter them. It is sometimes claimed that the god Forseti is meant here.

Around 1900 the Heligoland god Fosite was used on the island as a personification of the island, similar to Germania for Germany or Hammonia for Hamburg.

In the Baroque era, a templum Fostae vel Phosetae appeared on maps of Heligoland , which was then latinized to become a templum Vestae . A goddess Fosta later emerged from this, but is nowhere mentioned in ancient scriptures.