Fort Augustaborg in historical representation (end of the 18th century) 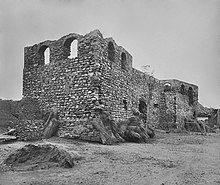 The ruins of Fort Augustaborg in the 1890s

Fort Augustaborg (also known as Fort Teshie ) was a Danish fort on the eastern Gold Coast in present-day Ghana , which was located about 15 km east of Fort Christiansborg at present-day Teshie . The fort was owned by Denmark from its construction in 1787 until 1850, after which Augustaborg was owned by the British until Ghana's independence in 1957.

The fort's name goes back to Princess Louise Auguste , the daughter of King Christian VII of Denmark , who was born in 1771 .

The fort was a smaller fortress of a square type with four bastions at each corner that served as gun emplacements. In contrast to the similar Danish sister forts on the Gold Coast, such as B. Fort Kongensteen or Fort Prinzenstein , Fort Augustaborg was of a smaller size.

History of the branch

In 1593 a Danish trading post is said to have existed at this point. However, at that time, trading posts mostly consisted of ships anchored on site, which served as trading posts, along with a few huts on land that served as temporary storage facilities. At that time there was no question of permanent fortified buildings due to permanent Portuguese hostilities. In addition, there was the immensely high trading risk of such undertakings at the time, which brought in enormous losses in the event of failure, but also enormous profits in the event of a successful implementation.

Probably in the course of the English conquests of the Gold Coast in 1664 or the subsequent clashes of the Anglo-Dutch War (1665–1667) and the associated recaptures by the Dutch admiral Michiel de Ruyter , the Danish officials seem to have given up their small trading post at Teshie, from then on, Teshie is listed in the annals of history as the Dutch establishment.

This changed in 1782 when the Fourth Anglo-Dutch Sea War (1780–1784) led to armed clashes between the British and the Dutch on the Gold Coast. In the course of these fighting and with the help of two British warships, the Dutch Fort Vredenburg in Kommendah had been captured by the British at the end of 1781 . An attack on the main Dutch fortress of Elmina in February 1782 failed despite numerous local support from Cape Coast . In March 1782, however, with Kormantin, Mouri, Beraku and Crèvecoeur (Dutch Accra), four more Dutch forts fell into the hands of the English.

In the coastal section stretching east from Accra to the mouth of the Volta , the Dutch WIC owned three other, smaller forts in the villages of Tema, Ponny and Teshie. However, their commanders had fled their posts after the fall of Crèvecoeur and left their respective teams behind the Danes sought refuge at Fort Christiansborg .

Although Denmark was not a participant in the war, the Danish governor at the time, Jens Adolf Kjöge, decided to take advantage of the WIC's plight in order to completely get rid of the already unpopular Dutch competition on the eastern Gold Coast. However, in this matter, Kjöge was well aware that a forcible occupation of the local Dutch settlements would cause some resistance among the local population, because the Dutch presence in these places was based on agreements that had been concluded in advance with local authorities. For example, Kjöge had generous gifts brought to the village chiefs and promised them certain advantages that the Dutch had not previously enjoyed if they exchanged the Dutch flag for the Danish in their villages and had themselves declared subjects of the King of Denmark.

Kjöges plan worked and a short time later the three Dutch posts in Tema, Ponny and Teshie were occupied by the Danes. Kjöge had the occupied posts destroyed. A short time later, in 1787, the construction of Fort Augustaborg began in Teshie. The purpose of the fort was to protect the local trading post, but also primarily to be able to better counter Dutch attempts at reconquest, which were expected sooner or later.

Despite Denmark not participating in the war, the violent protests that the WIC brought to the Danish government in Copenhagen regarding the illegal appropriation of the three branches, Tema, Teshie and Ponny, faded away . Even after the dissolution of the WIC in 1791 and the takeover of its possessions by the Dutch state, the demand, again put forward in Denmark, for the repossession of the three illegally appropriated branches remained unsuccessful. Tema, Teshie and Ponny remained in Danish ownership.

Handover to the British

With the promulgation of the new constitution on June 5, 1849, the decision was made that Denmark should give up and sell all of its African possessions. There were conducted negotiations with Britain and the Netherlands, and finally was sold in the summer of 1849 all Danish fort on the coast of Guinea for 10,000 British pounds sterling in the UK.

At the beginning of 1850 Fort Augustaborg was handed over to Great Britain along with the other Danish possessions on the Guinea coast. On March 30, 1850, the last Danish flag was lowered on the Gold Coast.

Until Ghana's independence on March 6, 1957, Fort Augustaborg was in British possession.