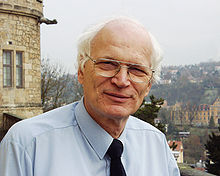 Friedhelm Prayon in front of Hohentübingen Castle on November 22, 2005

Friedhelm Prayon (born April 20, 1941 in Bochum ) is a German Etruscanologist .

Friedhelm Prayon received his doctorate in 1970 under Heinrich Drerup at the University of Marburg on Etruscan tomb and house architecture. In 1970/1971 he received a travel grant from the German Archaeological Institute (DAI) and worked in Rome from 1972 to 1977 as a research assistant in the DAI's photo library and as a research grant from the DFG (“Architectural Representations on Roman Reliefs and Coins”). In 1977 Prayon became a research assistant in Tübingen and completed his habilitation there in 1985 on Phrygian sculpture. After working for one year in the editorial office of the DAI Berlin, Prayon returned to the Eberhard Karls University of Tübingen in 1988 to the newly established chair for Etruscan-Italic archeology and stayed there until he was released from active service in July 2006.

From 1984 to 1991 Prayon carried out field research together with the University of Perugia in the Etruscan Cannicella necropolis of Orvieto , and from 1995 to 2001 in the Etruscan settlement of Castellina del Marangone near Civitavecchia . Friedhelm Prayon has been a corresponding member of the German Archaeological Institute since 1979 and a Membro straniero of the Istituto di Studi Etruschi ed Italici in Florence since 1982 .