This article deals with the librarian Günther Emig. For the Roman Catholic clergyman, see Günter Emig . 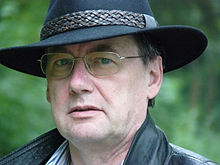 Günther Emig (born February 8, 1953 ) is a German librarian and former director of the Kleist Sembdner archive in Heilbronn . He was also known as an author, promoter and publisher of alternative literature. He lives in Niederstetten .

After studying German and political science at Heidelberg University and studying librarianship in Stuttgart, Emig worked as a librarian in 1980. From 1982 to 1992 he was deputy director and from 1992 to 2000 director of the Heilbronn city library. From 1991 to 2000, the Kleist Archive Sembdner was part of the city library as a special facility. At the end of 2000 the archive became independent and Emig became its director.

Director of the Heilbronn City Library

As director of the Heilbronn city library, he was interested in the connection between regional cultural history and supra-regional cultural history (literature, visual arts, music). He was in charge of the 13th Baden-Württemberg Literature Days (1996), which established a new type of event with their “house readings”: “If people don't come to literature, literature comes to people” . 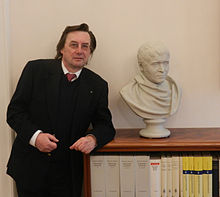 Guenther Emig in the office of the Federal President in Berlin, Bellevue Palace

Activities as editor and publisher 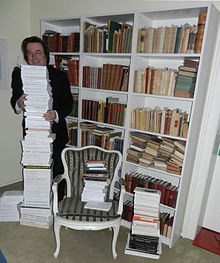 3 running meters of books published by Günther Emig, as of February 8, 2013

While still a student, Emig edited four volumes of the complete edition by the poet Erich Mühsam (1878–1934). In 1972 Emig founded the small publishing house "Günther Emig's literary business - behaves to Andy Warhol's Factory like a postmodern milking machine to milk of the pious way of thinking", which existed until 1984. Emig is considered "one of the most prominent alternative publishers" . He was a co-founder of the Working Group of Alternative Publishers and Authors eV (AGAV) and the IG literary magazines; Associations in which young authors looked for a forum against the established literature business. In this context, Emig published the directory of German-language literary journals (VdL) three times from 1979 to 1984 . Part of his literary magazine collection went to the mini press archive of the city of Mainz. He usually states the number of his published publications in running meters on the spine (3 running meters, as of February 8, 2013). He is the founder and editor of the Ludwig Pfau and Justinus Kerner website .

The literary magazine Hammer + Veilchen, pamphlets for new short prose that Günther Emig publishes together with Peter Engel , has been published since September 2014 . The magazine appears quarterly on the Internet (20 issues so far). The texts of a year are conventionally summarized in a yearbook (previously 5 years). In 2015 the book series "Edition Hammer + Veilchen" was added, in which ten volumes of poetry and short prose have appeared so far.

When Emig retired, he re-established his publishing house under the label "Günther Emigs Literatur-Betrieb". The main topics are contemporary literature, texts on literary modernism, including a 10-volume edition of the work by the writer Oskar Panizza , literary history and regionalia.

Director of the Kleist Archive Sembdner

As the webmaster of the website www.kleist.org, which he founded in 1996 and has been responsible for technical and editorial work since then, he created one of the earliest and most extensive websites on a German poet. In 2006, in preparation for the Kleist year 2011, he also established the website www.kleist2011.de, which has since been re-established.

The large number of publications he edited on Heinrich von Kleist , 167 in 19 series of publications from 1993 to 2018, earned him the reputation of "a very busy librarian, a restless, lively spirit and Kleist lover" and "a witty popularizer " to be. Emig retired in 2018 and recommended that the municipality give the collection on permanent loan to the Kleist Museum in Frankfurt an der Oder , which is now the center of German Kleist research.