This article deals with the Roman Catholic clergyman Günter Emig. For the librarian see Günther Emig .

Günter Emig (born June 24, 1929 in Weinheim ) is a German Roman Catholic clergyman . The retired cathedral capitular of the diocese of Mainz was instrumental in building the modern structures of the Caritas Association of the diocese and is co-inventor of the welfare station in Germany.

Training and stations as a priest 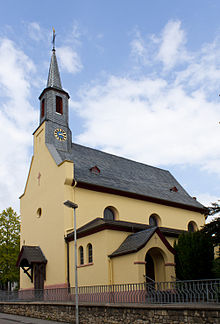 From 1975 to 1981 Günter Emig administered the parish Maria Queen Mainz-Drais .

Günter Emig grew up in Gorxheimertal . After graduating from high school in 1954 at the evening grammar school Ketteler-Kolleg Mainz , he studied Catholic theology . On 26 July 1959 he received by Bishop Albert Stohr in the Great Cathedral in Mainz , the ordination . Emig completed his chaplaincy in Bad Nauheim . From 1975 to 1981 he administered the parish Maria Queen Mainz-Drais .

Groundbreaking activity for the Caritas Association

It was Bishop Hermann Volk who put Günter Emig's future pioneering activity for the Caritas Association of the Diocese of Mainz on track by appointing him as Caritas Rector in Mainz and deputy to Caritas Director Othmar Weis in 1964. Emig played a key role in the establishment of St. Lioba in Worms in 1970, the first social station in the Federal Republic of Germany. This institution, which he helped to develop, was a completely new answer to the withdrawal of the nuns from community nursing due to a lack of young people . Emig's other activities in this area include setting up nursing schools in hospitals . He was also involved in the founding of the Fachschule für Altenpflege and the Fachschule für Erzieherinnen in Mainz. Emig, who from 1968 also worked as a diocesan pastor for the blind and deaf , was also active in child and youth social work .

In 1976 Cardinal Hermann Volk appointed Pastor Emig as diocesan Caritas director. He held this office until his retirement in 1992. Emig gave the Diocesan Caritas Association its modern basic structure, which unites five independent (district) Caritas associations based in Mainz, Worms, Darmstadt , Gießen and Offenbach under one roof. Emig pushed ahead with the expansion of the various advisory services and took care of the renovation and construction of old people's homes , which were later brought together in the specially founded Caritaswerk St. Martin. The clergyman also supported new initiatives to help disadvantaged people. For many years, among other things, the Caritas print shop, founded to help the long-term unemployed to reintegrate into the work process, and the alcohol-free restaurant Senfkorn near St. Stephan as a meeting place for alcoholic and mentally ill people were operated. Until 1986 Günter Emig also worked as a diocesan pastor of the Malteser Hilfsdienst (MHD) . After releasing his duties as diocesan Caritas director, he was chairman of the Caritas association for the diocese of Mainz from 1992 to 1999. As early as 1986, Bishop Karl Lehmann had appointed him as the department head for Caritas and social work in the Episcopal Ordinariate. At the same time he appointed him to the Mainz cathedral chapter and to the spiritual council of the diocese. Prelate Emig retired in September 1999 and became emeritus on December 31, 2000 .

In addition to his duties in Caritas, Günter Emig was a member of several administrative boards of church institutions, such as the supporting company of the Catholic University of Applied Sciences (KFH) Mainz and the Institute for Teacher Training (ILF), also in Mainz. For several years he was chairman of the working group of the Caritas associations in Rhineland-Palatinate and chairman of the League of Central Associations of Independent Welfare Care in Rhineland-Palatinate.

Günter Emig celebrated his golden jubilee as a priest in 2009. He lives in Mainz.

Günter Emig's merits have been recognized several times. Pope John Paul II appointed him Monsignor (Chaplain to His Holiness) in 1982 and Papal Honorary Prelate in 1990 . The Mainz Diocesan Caritas Association has also recognized its development work several times and particularly emphasized that Prelate Emig never saw himself as a “social manager”, but always as a pastor, and the Mainz Diocesan Caritas Association during its leadership years as one of the most cooperative in the applied throughout the Federal Republic. When he passed as chairman of the Caritas Association for the Diocese of Mainz, Bishop Lehmann praised him as the “father of the poor” . The Federal President awarded him the Federal Cross of Merit on ribbon in 1987 .