The Gauß-Gymnasium in Frankfurt (Oder) is a high school with a mathematical - scientific - technical character. It is named after the mathematician Carl Friedrich Gauß .

The school has four classes with a class size of approx. 24 students. A total of 547 students attended the school in 2018; 50 teachers looked after them. Like every Brandenburger Gymnasium, the students attend it from the 7th to the 12th grade. As one of the pilot schools in the state of Brandenburg, it offers students a performance and talent class from grade 5.

On a list of the best secondary schools in Capital magazine in 2005, the school ranked 19th nationwide.

The school was founded in 1964 as a special school in physics and technology . It was headed by the Frankfurt (Oder) district . In 1970 the political attitude in the GDR changed ; Talent was frowned upon and the school was subordinated to the Frankfurt (Oder) district. Now the normal curriculum of an extended high school (EOS) was used with only minor additions. There has been a boarding school since 1972 and since 1977 (200th birthday of CF Gauß) it has been called the Gauß School . In 1980 the school was placed under the management of the district again, in 1981 it became a special school in mathematics, science and technology with special school curricula and a special school diploma. After reunification , the school was again subordinated to the city in 1991. In 2003 it got the more modern former building of OSZ  1.

Promotion of the gifted

The school sees its special task in promoting gifted pupils with extended and scientifically in-depth lessons in mathematics, physics, biology and chemistry. Astronomy is also offered from the 10th grade, computer science is compulsory in grades 5 to 9 and can be chosen optionally from grade 10. In the 8th and 9th grades, all students take technology lessons, in which they learn basic technical knowledge from simple electrical circuits to the construction of transistors. In the 10th grade, technology lessons can be taken optionally.

As early as the 3rd and 4th grades, pupils recommended by their schools are additionally trained in mathematics in small groups. For elementary school students in the 5th and 6th grades there is the so-called student research center once a week; since 2007/2008 there have been fifth graders directly at the grammar school. In grades 7 and 8 there are working groups, in grades 8 and 9 there is an advanced training center in a natural science for students who are particularly interested in it (mathematics, biology, physics, chemistry or computer science). From the 10th grade onwards, students have the opportunity to be admitted to a performance center, which means that gifted students receive in-depth lessons in one of the four main natural sciences or computer science courses in addition to the advanced course in small groups. The education authority has also given the grammar school the opportunity to adapt the distribution of courses to the profile. The Gauß-Gymnasium has optimal room conditions with well-equipped laboratories and a dormitory for foreign students.

Successes can be seen in practically all scientific competitions and Olympics. 27 pupils have already made it into the German teams at the international Olympics (biology, chemistry, mathematics and physics). Two students won gold medals, five silver medals and eleven bronze medals; the others received recognitions. Since 1990, there have been a total of 69 state winners at state Olympics in these natural sciences, and 23 state winners at Jugend forscht . Despite the increased requirements, the Abitur average is 1.8, which is a whole grade above the Brandenburg national average. 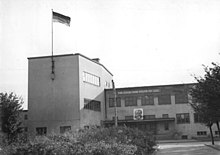 The “educational institution” in the building of today's Gauß-Gymnasium, 1951

The school is located in Friedrich-Ebert-Straße 52. The building was in 1930 and 1934 to designs by Adolf Petersen Pedagogical Academy in Bauhaus style built. In 1974 the interior of the building was redesigned according to plans by Dietrich Kloppstech and housed the district and district management of the SED until the fall of the Berlin Wall. After the fall of the Wall, the building was used in different ways, most recently as an upper school center . Subsequently, the building was extensively refurbished in accordance with monument regulations and has been used by the Gauß Gymnasium since 2003. This was previously in Gartenstrasse 1 and before that it was in Darwinstrasse.

There is a school library in the building, which also has an online library catalog for research. As one of only a few schools in Germany, the grammar school also has its own planetarium with 38 seats in the old water tower in the Neuberesinchen district and an observation tower on the school roof.

The GaWo (Gauß Festival Week) is an event week of the Gauß Gymnasium that takes place annually before the Easter break. During the Gauss week, the students have the opportunity to give or listen to lectures in front of classmates, including those of different grades, to take part in competitions or to listen to the guest lectures. In the Gauss week there are certain points for each event. These must be collected throughout the week. The aim is to create an incentive for the students to organize their week themselves, to acquire knowledge that the normal curriculum does not offer or to share this knowledge with others (e.g. in the form of lectures) and thus make use of the extensive program.