This article describes a recent event . The information can therefore change quickly. 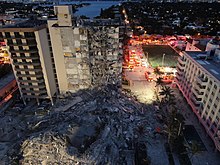 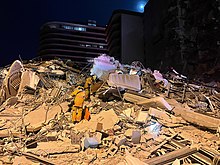 Champlain Towers South was a twelve-story skyscraper in Surfside , a suburb of Miami , Florida , USA. Completed in 1981, the complex at 8777 Collins Avenue consisted of condominiums. Part of the building collapsed on June 24, 2021 at 1:20 a.m. local time, the rest was brought down with a controlled demolition on the evening of July 4. It is known that the building had previously sagged about 2 mm into the ground per year. So far, 24 dead have been rescued, 124 people are still missing (as of July 3, 2021).

Many residents were surprised by the accident in their sleep. Since the collapse occurred at 1:20 a.m. local time, most of the residents were in their homes. Those who survived the collapse reported a loud bang before part of the building collapsed. A total of 55 apartments were affected by the collapse. The mayor of the district of Miami-Dade , Daniella Levine Cava , said: "We will continue the search and rescue operation, because we still have hope of finding survivors." Every minute counts.

Structural defects in the building

Two days after the collapse, a 2018 inspection report written by an outside company, in which experts listed several shortcomings, became public. Among other things, there is talk of “considerable structural damage”. Cracks in the concrete, dilapidated pillars and damage that required costly and extensive maintenance are listed in the report. Almost half of all balconies were damaged, according to the report. It remained open whether the defects could be related to the collapse.

Levine Cava stressed that she was not previously aware of the report. The authorities followed up on all clues and the cause of the accident to the bottom, so that something like this never happens again, she promised.

Millions of dollars in repair work were reportedly in place. NIST ( National Institute of Standards and Technology ) investigators are investigating the building to determine the cause of the collapse.

Citing minutes from a board meeting, the Miami Herald reported that Surfside City Chief Construction Officer Ross Prieto had known of major structural damage to the Champlain Towers since 2018. Nevertheless, he informed the residents in November 2018 that the building was "in very good condition".

In 2001 and 2015, an owner filed a lawsuit against the building company for failing to repair cracks in the outer wall of her apartment. According to the 2015 lawsuit, the cracks resulted in $ 15,000 in water damage. Such cracks can be signs of problematic complex phenomena in a reinforced concrete structure like the Champlain Towers.

The remaining part of the building should be demolished in the further course of the work, as announced by Levine Cava. You have signed a corresponding order. It was therefore clear that all residents would lose their apartments. The building poses a threat to public safety, Levine Cava explained the decision. “We know that the building is not stable and has to be demolished.” The residents of the part of the building that was still standing were not allowed to return to their apartments after the collapse, not even to fetch personal belongings before the demolition. Because of the approaching tropical storm Elsa , the remains were brought to an early collapse with a controlled demolition on the evening of July 4th. After the targeted demolition of the building remains, the emergency services discovered more corpses.

According to initial findings, it is assumed that the reason for the "progressive collapse" lies in the lower part of the building complex, reported the New York Times . "It appears to start either at or very near the bottom of the structure," engineer Donald O. Dusenberry told the newspaper.

In order to release additional funds and material after the accident, Florida Governor Ron DeSantis had declared a state of emergency. This was confirmed by President Joe Biden so that federal funds could also be made available. The disaster control agency FEMA is also involved.

Joe Biden visited the scene of the accident on July 1, 2021. Biden was informed about the current status of the rescue operation by representatives of the authorities in Surfside.