History of the Jews in Amsterdam

"Jewish Quarter in Amsterdam", painting by Eduard Alexander Hilverdink, around 1889

The history of the Jews in Amsterdam has described Jewish life in the city for more than 400 years. Amsterdam was and is one of the most important Jewish centers in Western Europe.

In 1579, according to the Union of Utrecht, freedom of belief was guaranteed for all citizens of the Dutch provinces. In 1593, large groups of Sephardic Jews from Portugal came to Amsterdam after some Spanish Jews had already settled here after the Alhambra Edict . Most of the time it was now forcibly converted Marranos who had only been able to practice the Jewish religion in secret. They were often wealthy; many were merchants, scholars, doctors, or rabbis. Despite some strict regulations, they enjoyed freedoms in Amsterdam that they did not have in other European cities. The immigrants stimulated trade and economic life. In 1602 the first Jewish community was founded by a group of Portuguese Jews. In the same year Jewish merchants were involved in founding the Dutch West India Company .

A cemetery at Groet has been in use since 1607. In 1608 the community Beth Jacob , u. a. founded by Jacob Tirado . In 1612 the application to build a synagogue was not approved. In 1614 the cemetery in Ouderkerk aan de Amstel was laid out. In 1616 the Ets Haim library was founded. In 1621 they were also involved in the founding of the Dutch East India Company . In 1626 the first Hebrew printing company was founded by Menasse ben Israel .

Ashkenazi Jews from Germany came to Amsterdam from around 1600 . Because of the Thirty Years' War and after the massacres during the Khmelnytskyi uprising in 1648, many Jews came from Eastern Europe. They founded their own communities and differed from the local Jews in religious practice, in their manners and customs, the Yiddish language and poverty. Their own synagogue was built in 1639. They soon formed the larger community.

Jewish face in a painting by Rembrandt van Rijn , 1648

Amsterdam quickly became the center of Jewish learning in Europe. Rembrandt depicted Amsterdam Jews in numerous paintings. Baruch de Spinoza lived in Amsterdam until 1659, as was the free thinker Juan de Prado . There were other Jewish printing works of Uri Phoebus ha-Levi , Josef Athias and David de Castro Tarras. By 1650 Amsterdam was the wealthiest city in Europe. In 1671 the Great Synagogue of the Ashkenazi community was inaugurated, and in 1675 the Portuguese synagogue of the Sephardic. In 1678 the first Hebrew Bible appeared in Yiddish translation by Jekutiel Blitz , from 1686 to 1688 the first known magazine in Yiddish at all, the Dinstagische Kurant . From 1679 onwards, Amsterdam lost its importance as a supraregional port city and transshipment point for many goods and instead developed into the most important financial center in Europe.

Oriental Jews also came to Amsterdam. High taxes and discrimination led to the increasing impoverishment of a large part of Portuguese Jews. Isaac de Pinto criticized this situation in 1748. At the end of the 18th century there were around 20,000 Jews in Amsterdam. This made it one of the largest Jewish communities in Western Europe. In 1796 Jews received full civil rights. In the course of the 19th century, the different origins of the Sephardic Jews and the Ashkenazim lost importance and the demarcation from the non-Jewish Dutch also dwindled. Politically, the Jews mostly joined the liberal or socialist camp. 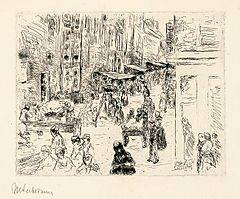 Since 1933, many Jews from Germany fled to Amsterdam. The Netherlands had been occupied since the German campaign in the west until 1944. At the time of the German occupation of the Netherlands on May 10, 1940, Amsterdam had a Jewish population of around 75,000, which by 1941 had grown to over 79,000. The share of Amsterdam's Jewish population was almost 10 percent of the total population. Of these, more than 10,000 were foreigners who had come to Amsterdam since 1930.

After the February strike in Amsterdam in 1941 , 389 Jews were deported to the Buchenwald concentration camp and later to the Mauthausen concentration camp . The first raids on Jews took place in Amsterdam on July 14, 1942, during which around 540 people were arrested and taken to the Westerbork assembly camp , the stopover after Auschwitz . Further large-scale raids followed from May 1943; in September 1943, the last Jews were deported from Amsterdam along with the staff of the Jewish council.

Of the approximately 80,000 Jews in Amsterdam before the occupation began, only 10,000 survived the war.

Today around 15,000 Jews live in Amsterdam. There is an Ashkenazi, a progressive, a Portuguese and a liberal Jewish community with a total of nine synagogues. There are six Jewish cemeteries in and around Amsterdam. Every year there are Jewish Music Days and a Jewish Film Festival. There is a Jewish yearbook and a Jewish newspaper. The Jewish Museum is the center of cultural life . The progressive Levisson Instituut, a seminar for the training of rabbis and cantors , has existed since 2002 .