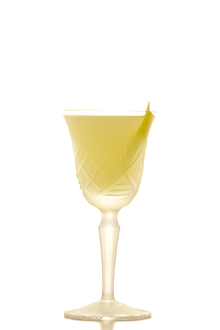 Gimlet in a small wine goblet with zest

The Gimlet is a classic cocktail . The short drink consists of just two ingredients: Gin and Lime Juice Cordial .

The gimlet was first drunk in the British Royal Navy in the late 19th century , but it remained meaningless outside of England for a long time. It then became widely known as the favorite cocktail of private investigator Philip Marlowe's client Terry Lennox .

“We sat in the corner of Victor's bar and drank gimlets. “They have no idea how to do it!” He said (meaning: Lennox, note) . "What they call a gimlet here is just lemon or lime juice with gin and a dash of sugar and bitter beer. A real gimlet consists of half gin and half Rose's Lime Juice and nothing else. But that beats all martinis by a huge margin. " (Raymond Chandler" The Long Farewell "; what Wollschläger translates here with" bitter beer "is actually Angostura bitter .)

The claim made on their bottles by some lime juice cordial manufacturers that the gimlet was also the favorite cocktail of the writer Ernest Hemingway cannot be substantiated.

While “Marlowe's Gin Gimlet” provides equal parts of gin and lime juice cordial, a larger proportion of gin is usually recommended in the specialist literature. The drink becomes drier and tastes cleaner if you use a good gin. On the other hand, a good Lime Juice Cordial cannot simply be replaced by fresh lime juice and sugar syrup without changing the character of the cocktail. The drink is mainly stirred on ice, but can also be shaken in a cocktail shaker and then served either in a small tumbler on fresh ice or without ice ("straight up") in a pre-chilled cocktail bowl.

In the vodka gimlet, the gin is replaced by vodka , in the rum gimlet by white rum. In the tequila gimlet, adding a little lemon juice is also common.