In 1971, the Central Committee of the Communist Party of the Soviet Union commissioned the development of a new, portable anti-aircraft guided missile that was to replace the 9K32 Strela-2 and 9K34 Strela-3 systems in the late 1970s . The new air defense system was named 9K38 Igla . NATO named this system SA-18 Grouse. There were always delays in development. When the development was still not completed in 1978, an interim solution was decided. The already completed fuselage and the rocket motor of the new guided missile were to be further developed into an interim system with the tried and tested seeker head of the 9K34 Strela-3. This system was named 9K310 Igla-1 . It was introduced into the Soviet land forces in 1981 and was given the name SA-16 Gimlet (" nail drill ") by NATO .

The 9K310 Igla-1 system consists of the following components:

The 9M313 guided missiles are housed in sealed GRP transport and launch containers. At the launch canister that's 9P519 -Griffstück with integrated electronics, 9P238 - thermoelectric battery and a sighting device with daylight aiming optics mounted. The Igla-1 weighs 17.9 kg when ready for launch. The sighting device can 1L14 - identification friend or foe system can be connected. The 9M336 missile is equipped with a passive infrared seeker head from LOMO . The seeker uses an indium antimonide - Semiconductors and responsive to infrared radiation 3-5 micrometers wavelength. Before starting, the seeker head is cooled with liquid nitrogen . The seeker head enables the acquisition of targets in bad weather or at night. Likewise, targets approaching frontally can be fought. The fragmentation warhead weighs 1.27 kg and is detonated by an impact fuse. that is, the missile must hit the target directly. One serves as a drive solid - rocket motor is ignited, when the ejected by a gas charge missile, the launch tube has left a few meters. The target tracking by the missile is based on the principle of proportional navigation , i.e. H. the electronics calculate the angular velocity of the target and send control commands to bring the difference to zero. If the missile misses the target, it destroys itself after a certain flight time.

The Igla-1 works according to the fire-and-forget principle, i. H. after firing, the missile pursues its target independently. The Igla-1 can be used to fight aircraft, helicopters and drones . The vertical range of application of the guided weapon is 10 to 3,500 m with a horizontal combat range of 0.5 to 5.4 km. Air targets approaching from the front can be fought up to a flight speed of 360 m / s. The maximum airspeed for combating an air target that is flying away is 320 m / s. 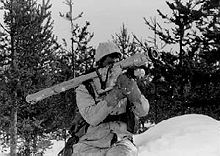 In addition to the official users of the Igla-1, the weapon is also suspected to be in the hands of separatist and extremist groups.

The SA-16 Gimlet was used in various armed conflicts in the Gulf region, Africa, South America, the Balkans and the Caucasus. Seven Alliance aircraft and four helicopters with the SA-16 Gimlet were shot down during Operation Desert Storm in Iraq .

At least two NATO aircraft of the SA-16 GIMLET fell victim to the clashes in the Balkans . During the clashes in the Caucasus, several Russian fighter planes and helicopters with SA-16 guided missiles were shot down by the rebels.

The downing of the presidential plane in Rwanda on April 6, 1994 , which triggered the subsequent genocide in Rwanda that left at least 800,000 dead, was carried out using SA-16 missiles.

In the years 2003 to 2006, after the US invasion of Iraq , at least six US helicopters with SA-16 guided weapons belonging to the resistance fighters were shot down. In Iraq, the northern Iraqi army of the autonomous Kurdish region claims to have several hundred SA-16 Gimlet.