The cockpit of a Fairchild-Republic A-10A Thunderbolt II

The Fairchild-Republic A-10 Thunderbolt II (German thunderbolt ), also by their pilot Warthog ( " Warthog ") or short Hog called, is since 1975 the main ground attack aircraft of the US Air Force .

The simply structured, effective and robust twin-jet subsonic jet is intended for use against ground targets, especially for fighting armored vehicles . In addition, it was used as the OA-10 in the function of a flying fire control station.

The name Thunderbolt II picks up on the name of the Republic P-47 Thunderbolt , which was used as a fighter aircraft in World War II and later as a fighter-bomber by the US Army Air Forces .

The only permanent stationing location of an A-10 squadron in Germany , which also used the A-10C from 2009, was Spangdahlem Air Base between January 1993 and May 2013 after the end of the Cold War . In the first year this was the 510th and from spring 1994 the 81st Fighter Squadron . In February 2015, a total of 12 of these aircraft were relocated back to Spangdahlem.

The A-10 was developed within the US Air Force's Attack Experimental (AX) program, which was initiated in June 1966 to find a suitable successor to the Douglas A-1 . This was characterized by a relatively simple, robust construction, but could carry a large weapons load, making them particularly suitable for the task of close air support - suitable (Close Air Support CAS). On March 6, 1967, the Air Force addressed a call for drafts to 21 companies. The US Air Force's demand also had the political background that it represented a counterweight to the efforts of the US Army and US Marine Corps, which were each trying to enforce their own procurement of CAS aircraft.

Was with the first drafts still in most cases, a design with two turboprop engines provided they waved from 1969 to turbofan engines with a high bypass ratio to. On May 7, 1970 twelve manufacturers received an invitation to submit offers based on a unit price of 1.4 million US dollars with a production volume of 600 machines. Boeing, Cessna, Fairchild, General Dynamics, Lockheed and Northrop made offers, after which Northrop and Fairchild-Republic were declared the winners on December 18, 1970. Both companies received the associated contract to build two prototypes. On March 1, 1971, both models received their official designations Northrop YA-9 and Fairchild-Republic YA-10. The first YA-10 flew on May 10, 1972, the YA-9 followed on May 30, 1972.

The formal evaluation of the prototypes by five pilots from the Tactical Air Command and the AFSC lasted from October 10 to December 9, 1972, with the first prototype being flown 307.6 hours and the second 328.1 hours. The design of the A-10 prevailed against the competition. Under pressure from the US Congress , which insisted that the A-10 should also carry out a comparison flight against the Vought A-7 D, the funds for four YA-10A were temporarily cut. The flights with both aircraft were conducted in April and May 1974 at McConnell AFB , with four Air Force pilots using the second YA-10 against an A-7D. The YA-10 won mainly because of its longer dwell time of two hours at a distance of 480 km from the base, the A-7 was only able to guarantee this for eleven minutes. If the proposed A-7DER had been procured, the A-7D would have had a longer fuselage, a new engine and the GAU-8 Avenger cannon.

The first production-ready A-10A were delivered to Davis-Monthan Air Force Base in Arizona in October 1975 . In the 1980s, operational tactics stipulated that the A-10 should disrupt enemy tank divisions in the event of a Soviet attack on West Germany . In constant rotation, a number of the 108 A-10A aircraft of the 81st Tactical Fighter Wing stationed in England on the neighboring bases RAF Bentwaters and Woodbridge were relocated to so-called Forward Operating Locations (FOL) in western Germany: Ahlhorn , Nörvenich , Sembach and Leipheim . 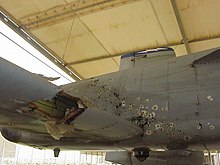 An A-10 badly damaged by anti-aircraft fire over Baghdad

During Operation Desert Storm in 1991 over Iraq , the A-10 achieved a reliability of 95.7 percent. They flew 8,100 sorties and launched 90 percent of the AGM-65 Maverick missiles fired in that war . The Thunderbolt II planes destroyed over 1,000 tanks, 2,000 military vehicles and 1,200 artillery pieces. An A-10 also achieved its first aerial victory of this type when an Iraqi Bo 105 was shot down with an on-board cannon. A total of two kills by Iraqi helicopters have been confirmed. Five A-10s were lost - far fewer than the military planners expected.

In 1999 A-10 were involved in NATO's air offensive in the war in Kosovo . However, they were only used cautiously to avoid US losses, which prevented the machines from being used effectively. During the US invasion of Afghanistan in 2001, the A-10 were initially out of action, but were later stationed at Bagram Air Force Base and participated in attacks on Taliban positions, including Operation Anaconda in March 2002. As a result of less restrictive rules of attack the planes performed better there.

In 2003 the A-10 flew a second time over Iraq as part of the Third Gulf War . 60 A-10s were stationed in the Gulf, one of which was lost to Iraqi defensive fire near Baghdad Airport towards the end of the fighting .

When the US Air Force announced plans to take the A-10 out of stock in 2004, the US Army immediately offered to take over the aircraft. However, this would have required an amendment to the 1947 partition agreement between the Army and Air Force, which states that the Army may not use fixed-wing aircraft, but only helicopters.

As part of budget cuts, the US A-10 fleet, which previously consisted of 365 active aircraft, was significantly reduced (five squadrons were decommissioned - effective from budget year 2013). As part of an update program, the 242 machines remaining in active service will receive new wings (manufacturer Boeing), which are designed for a service life of 10,000 flight hours and should make the fleet usable by 2040. A replacement by the F-35 is currently not planned and is ruled out by leading US military planners. It is likely that the A-10 will be replaced by an unmanned successor. In February 2010, DARPA officially received an order for the development of an unmanned successor model for the A-10.

The comparatively low costs are one reason why the A-10 continues to be in use despite its now quite long service life. It forms the backbone of the US air force when fighting armored vehicles with a long approach time to the area of ​​operation. The AH-64 Apache attack helicopter, which is also used to combat armored units, has a much shorter range, cannot be air-fueled and is much less resistant to fire.

Considerations to replace the A-10 with a version of the F-16 specialized in ground combat were abandoned after field tests during Operation Desert Storm . The F-16 received external containers (pods) with a modified five-barrel automatic cannon, as it is similarly used in the A-10. When firing, however, the entire aircraft was set in strong vibrations, so that targeted shooting became impossible and damage to the aircraft's airframe was feared. The experiments were stopped after only two days. There is currently no aircraft that could replace the A-10 in its field of activity. When Iraqi prisoners of war were interviewed, it emerged that the A-10 was, alongside the Boeing B-52, the most feared Allied aircraft over the Middle Eastern battlefield.

On February 24, 2014, Secretary of Defense Chuck Hagel gave a speech in which he presented a cost-cutting program, including a plan to decommission the entire A-10 fighter fleet. According to the Chief of Staff of the United States Air Force , General Mark Welsh , with the closure of about 300 A-10 to 2019, a sum of 4.2 billion dollars could be saved. However, in a vote on June 19, the US House of Representatives blocked the decommissioning of the A-10. On June 20, the 'Defense bill' passed the House of Representatives - with an appendix on the A-10. In mid-January 2016, it became known that the Air Force was putting its plans to retire the A-10 on hold for an indefinite period of time, as the machine plays a key role in the ongoing mission against IS.

Losses outside of war operations

The pilot is protected by a 400 kg heavy titanium armor, which also covers parts of the avionics . The armor is called "The Bathtub" by pilots because of its shape. Important structural elements are designed redundantly in order to enable the onward flight after a fire: The fuel tanks are self-sealing and designed in such a way that they do not explode if hit; the hydraulic control is designed to be double redundant and has a mechanical emergency system (triple redundant) which enables control in the event of a hydraulic failure. The engines are placed as far apart as possible to minimize the risk of simultaneous destruction. Their arrangement behind / above the wings reduces the risk of damage from defensive fire against the aircraft in flight. The A-10 is nevertheless a comparatively easy target for surface-to-air missiles because of its low speed.

Maintenance is made easier because many parts can be used on both sides, including the engines, main landing gear and vertical stabilizers . The fuel supply is mainly transported in the fuselage; only a small part in integral tanks ( wet wing ) in the wings. This tank arrangement reduces the moment of inertia about the vertical axis and longitudinal axis. The maneuverability increases, but also the load on the wing root .

The A-10 can operate at low altitude below 300 m (1000  ft ) with a range of 2.4 km and is particularly agile for this purpose. The large operational radius and the short take-off and landing capabilities allow operations from temporary bases near the front. Night vision devices enable missions in the dark.

The cockpit has a full-view hood to improve all-round visibility . Basically, it is inferior to enemy fighters, as these could usually shoot down an A-10 with long-range air-to-air missiles before the A-10s with their superior cannon armament or the optional AIM-9 "Sidewinder" missiles could fight back. That is why today, as a rule, care is taken to ensure that the A-10 are protected by a sufficient number of fighters.

Avionics equipment includes communication devices, an inertial navigation system , fire control systems , aiming aids and night vision devices. A head-up display (HUD) shows the pilot flight and navigation data. The LASTE system ( Low Altitude Safety and Targeting Enhancement system ) continuously calculates the point of impact of ballistic bombs (CCIP) and displays it on the HUD to increase target accuracy. The A-10 has automatic countermeasures against attacks with infrared or radar-guided surface-to-air missiles . All A-10 are currently being retrofitted with GPS .

The A-10 has no stealth capabilities , but is relatively quiet thanks to its turbofan engines; its camouflage pattern gives it a good visual camouflage, especially at night . 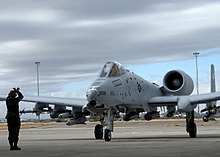 YA-10A
Pre-production version. Twelve pieces built.
A-10A
Single-seat version for ground attack and air support.
OA-10A
Renaming of older A-10A, which should be used as a fast "Forward Air Controller". No modifications were made, only the equipment carried is reduced to target marker missiles. Should serve as the successor to the OA-37B and Rockwell OV-10 A.
YA-10B Night / Adverse Weather
Single experimental two-seater prototype for use at night and in bad weather. Converted from an A-10A.
A-10C
modernized A-10A for the Gradual Precision Engagement (PE) program. For this purpose, a digital weapon management system with a new central computer, data link SADL (Situation Awareness Data Link) with connection to Link-16 data link and MIL-STD-1760 data bus was installed, new weapons (JDAM, WCMD) and the target containers Northrop Grumman Litening AT and Lockheed Martin Sniper XR integrated. A new cockpit with two 13 × 13 cm color screens and HOTAS controls was also installed. In order to meet the increased requirements for electrical power, a second generator was installed at the same time.

A-10 with the "European Lizard" painting

Explosive ordnance up to 7,257 kg at eleven external load stations

The best sensor for target acquisition on the A-10 until 2005 was the pilot's good eye. From variant A-10C, external containers with search sensors were carried along.