Gatling guns are automatic firearms whose reloading mechanism is operated by rotating the barrel set around an axis of rotation . The Gatling principle was developed in 1861 by the American inventor Richard Gatling and used in the Gatling Gun . Later, both machine guns and machine guns were developed based on this principle.

A Gatling weapon is basically constructed differently than a revolver cannon , despite its partially similar functionality . 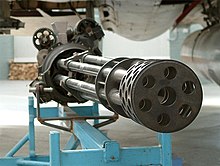 The Gatling principle in the M61 Vulcan machine gun 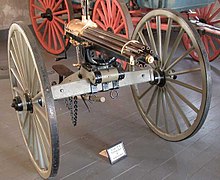 All Gatling guns today are further developments of the Gatling Gun , which was invented during the American Civil War in 1861 . The United States government at first had no interest in it; Nevertheless, the Union General Benjamin Franklin Butler bought 12 pieces and used them on the front near Petersburg .

The original Gatling had six barrels, which prevented the rifle barrels from overheating. They rotated around a central axis. The cartridges were fed into the cannon from above by gravity. Gatling wasn't the first to consider combining multiple runs. Appropriate ideas existed as early as the 18th century and the French Mitrailleuse von Nordenfelt also had several barrels.

It took four men to operate the Gatling machine gun. The lightest models weighed over 45 kilograms. The 1876 model was theoretically able to fire 1200 rounds per minute; under operating conditions it was still around 400 rounds per minute. Before black powder was replaced by low-smoke powder , there was also the problem that a large cloud of powder vapor formed when the gun was fired, which obstructed the shooter's view.

A similar weapon is the 37 mm Hotchkiss cannon , but with a larger caliber.

At the beginning of the 20th century, the armies converted to recoil loader machine guns and so the Gatling principle was initially forgotten.

In "Gatlings" several barrels are constructed around an axis so that they can rotate as a bundle. Each barrel has its own bolt and, with mechanical ignition, its own firing pin . The locks are unlocked, opened and closed again by a control cam during one full revolution of the barrel set, with the reloading function taking place when opening and closing.

At the appropriate point in one revolution, a cartridge is inserted into the open breech of a barrel. The barrel then continues to turn up to the point of rotation at which the slide is closed by the control cam. The cartridge is fed into the chamber and ignited. With further rotation, the breech is pulled back again, whereby the empty cartridge case is pulled out and ejected. When the rotation is continued, the next cartridge is then fed into the still open closure. This process runs continuously in all runs. Each barrel fires one shot per revolution. 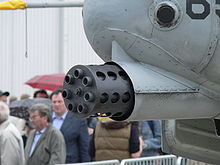 Automatic firearms based on the Gatling principle are used today on a large scale in the military because of their high firepower, for example for infantry support, for air defense or as on- board armament for land, air and water vehicles . With 10,000 rounds per minute, the Russian automatic cannon Grjasew-Schipunow GSch-6-23 reaches the highest rate of fire of the Gatling constructions currently in use. Both Gatling machine guns and Gatling cannons are manufactured, with the MG projectiles firing analogously to the distinction between machine guns (MG) and automatic cannons (MK) , whereas MK fire grenades . Accordingly, Gatling weapons are usually machine cannons from a caliber of 20 mm.

Compared to Gatling guns, conventional, single-barrel, automatic firearms require pauses in fire to cool down because of the heating of the individual barrel after the bursts of fire, or the barrel needs to be replaced at regular intervals or complex cooling systems for the barrels. The disadvantage of the higher weight of the Gatling guns is not so important because they are mounted on mounts or in vehicles or aircraft with a corresponding load capacity for the usual applications.

Also Gatling weapons for caseless ammunition ( caseless ) can be constructed in which the propellant is cast with the floor and the exercise of electrical ignition. Thus, the ignition timing can at such enormous cadence adhered more closely (100 rounds per second) and so the point of impact can be improved. However, the continuous fire time is reduced for thermal reasons, since the metal casings of conventional ammunition can absorb a large part of the waste heat and dissipate it from the weapon when it is ejected. With caseless ammunition, the weapon has to absorb the heat and therefore overheats more quickly in continuous fire.

The first Richard Gatling models were still driven with a hand crank. The cadence of the weapon was therefore strongly dependent on the strength of the operator. Modern Gatling guns are mostly externally powered; that is, the barrel set is rotated by means of an electric, hydraulic or pneumatic drive. Gatling guns are not always externally powered, however. It is common for the US “Gatlings” to equip them with electric or hydraulic drives. Russian developments, on the other hand, are self-propelled via gas pressure; that is, they are gas pressure boosters . The advantage of self-propulsion is the shorter start-up time to set the pipes in rotation. This means that this weapon fires more projectiles than an externally powered Gatling in the first second of the burst. Another advantage of self-propelled weapons is that they do not depend on an external source of energy. The disadvantage is the lower level of functional reliability: externally powered Gatlings simply eject cartridges that have not been ignited, while gas pressure chargers stop because the missing gas pressure does not charge the next cartridge. Pyrotechnic cartridges provide a remedy here . These small charges charge the weapon (cocking or releasing the weapon) and thus eject the misfired cartridge. When the cannon fires again, this is done again by the gas pressure of the ignited cartridges.

In terms of its function, a Gatling cannon is not a revolver cannon . In contrast to normal automatic firearms, a revolver cannon has a rotating cartridge drum, like the revolver , and only one barrel, in contrast to the Gatling. There are two completely different building principles of weapons. An example of a revolver cannon is the Union Repeating Gun contemporary with the original Gatling . A Gatling is also not a chain gun . This is a single-barrel, externally driven automatic cannon , which, apart from the external drive via a chain (engl. Chain ), is a classic machine gun.

A minigun is a machine gun that works with the Gatling principle. Gatling cannons fire grenades with a caliber of 20 mm or more, while a minigun shoots machine gun ammunition . The term "minigun" therefore describes a machine gun that works on the Gatling principle. The name "Minigun" was introduced as a suggestive designation for the M134 or GAU-17 and GAU-2 , a Gatling in caliber 7.62 × 51 mm (the weapons are identical, only with different names: Gun Aircraft Unit for the Air Force and M134 for the Army). These machine guns were smaller-caliber developments of earlier Gatling cannons, such as the M61 Vulcan , hence the name "Minigun". This designation was continued with the XM214 , also a machine gun based on the Gatling principle, but in caliber 5.56 × 45 mm . Hence the suggestive name “Microgun” because it was even smaller than a minigun.