The title of this article is ambiguous. Further meanings are listed under Hafenstrasse (disambiguation) . 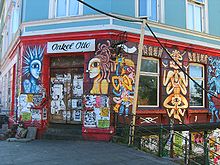 Balduintreppe, corner of Bernhard-Nocht-Straße with the pub Onkel Otto , July 2006

Demonstration for the preservation of Hafenstrasse on December 20, 1986, here after its start in St. Georg

By Keyword Hafenstraße be approximately eleven former particularly in the media and politics occupied , threatened with demolition and in a cooperative multi-storey residential buildings transferred primarily from the early days in the St. Pauli harbor road and in the Bernhard-Nocht-Strasse in St. Pauli , Hamburg , Germany .

The houses, which were built around 1900, are located at the Hamburg harbor between the Reeperbahn and Landungsbrücken . The affected houses owned by SAGA , a housing association of the city of Hamburg, were partly empty; Apartments were also rented to the Jusos , who ran a “socio-educational research community” there.

House fighting of the 1980s

Some of the houses were to be demolished based on a building survey that found the buildings uninhabitable. At the end of 1981 the houses were "slowly occupied" during a New Year's Eve party.

In the spring of 1982 SAGA had the houses cleared; two days later these were "repaired" by occupiers. There were further arguments when SAGA had the ground floor of one of the houses walled up and strangers walled up the entrance to the SAGA administration in Altona. The residents demanded negotiations for a usage contract; an agreement was reached on “winterization” and repairs to the electrical system in the houses.

Funds were approved in 1983; nevertheless there were first riots and then searches of some houses and arrests. The city of Hamburg announced an architectural competition to redesign the edge of the harbor; in the Senate calls for "clear legal relationships" were loud. The occupiers demanded a general lease agreement for all houses as well as for the open spaces in front of and between the houses. In November 1983, three-year rental contracts were signed. The residents began to repair the houses in order to invalidate the "uninhabitable" status found in the building report. The first "New Year's Eve" days took place between Christmas and New Year's Eve, a mixture of political meetings, events and concerts.

In January 1985, burning barricades were erected on the Hafenrandstrasse by RAF prisoners in support of the hunger strike. Some representatives of the district office of Hamburg-Mitte, the interior and building authorities began to work on a plan to clear the houses. In March, the houses were enforced under police protection. The HEW cut several electricity connections due to unpaid bills, the police are carrying out searches on suspected participation of people in criminal acts.

In autumn, the media raised the suspicion that people from the environment of the Red Army Faction would live in Hafenstrasse. The head of the Hamburg Office for the Protection of the Constitution, Christian Lochte , gave the taz a detailed interview; after that, Autonome devastated the editorial offices of taz Hamburg.

In 1986 further attempts were made to counteract the impending eviction and demolition; the residents re-covered roofs and decided to open discussions with social groups. Another house was occupied and vacated soon after. In a large-scale police operation, several apartments were searched and cleared. There was a demonstration and sometimes militant actions in the urban area of ​​Hamburg and in various cities in Europe. Large-scale police operations took place almost regularly; they temporarily included demonstrations. On December 20, 12,000 demonstrators moved from downtown Hamburg to Hafenstrasse. Protesters injured 100 police officers.

In the spring of 1987 there were several coordinated, sometimes militant, actions at various locations in Hamburg. In the summer, the vacated apartments were officially reoccupied. The fortification of the houses against the upcoming evacuation as well as broad public relations in favor of a contractual solution determined from then on the everyday life in the houses. During a demonstration in support of the occupation, the pirate station “Radio Hafenstrasse” went on air. When, in November 1987, the ongoing negotiations for a new contract between residents and the Senate of the Free and Hanseatic City of Hamburg were both considered to have failed, residents and supporters erected barricades around the houses. The occupiers built steel doors into the houses, welded and barricaded the windows on the ground floor, blocked the stairwells and secured the roofs with NATO wire . 5000 police officers were ready to storm the area. A compromise was finally reached under the leadership of the First Mayor Klaus von Dohnanyi : A new contract was signed, the barricades were dismantled and after a 24-hour ultimatum a peaceful solution was reached, for which von Dohnanyi later received the Theodor Heuss Medal was honored.

In 1990 all houses were searched by the police and the federal prosecutor's office . In 1993, the termination of the lease contract due to misconduct by the residents was recognized as legal by the Hanseatic Higher Regional Court in Hamburg. In 1994, the then mayor Henning Voscherau (SPD) offered to refrain from eviction and demolition if they would accept the development of the adjacent open space.

Establishment of a cooperative

In 1995 the city sold 11 houses to the cooperative "Alternatives on the banks of the Elbe" founded especially for this purpose, and the houses were renovated. Of the total costs, more than 9 million euros, the authority contributed 3.85 million; the cooperative raised 1.3 million.

In 2012 Hafenstrasse consisted of 12 houses owned by a cooperative . In October 2007, a new residential building for around 40 residents (planB residential project) was added at Bernhard-Nocht-Strasse 26. In the past, provocations led to riots and police operations. Since the prosecution of criminal offenses was usually only possible with massive police action, the term “legal free area” was coined by critics. City, authorities and police designed simulation games to bring about an evacuation. The interest of the residents, on the other hand, was to prevent the houses from being demolished, to obtain cheap living space and to lead “a self-determined life without alienation ” there. According to the building authorities, around 120 people of all ages live there. From the mid-1990s, the district also became a popular tourist destination. Today the quarter is considered “hip and chic” in travel guides.

Since 2016 there have been conflicts between residents and the police because the police are increasingly checking people of real or alleged black African origin in the area of ​​Hafenstrasse. The background to this is the open, rapidly increasing drug trade by black African refugees, particularly on the Baldwin stairs. In the course of the conflict, the car of the head of the so-called "task force" was set on fire by strangers.

Hafenstraße 2013 - new buildings next to old buildings. A widely visible protest: " no one is illegal "

The Park Fiction Project and the Golden Pudel Club are located near Hafenstrasse, on Pinnasberg .