No one is illegal

Logo of No man is illegal

No one is illegal on the one hand one to the dictum that have become a political slogan , on the other hand, the name for a nationwide network (proper spelling no one is illegal , shortcuts kmii ) mainly autonomous , anti-racist groups on a voluntary basis, but also of church asylum initiatives which is for foreigners without a residence permit in Germany or migrants threatened with deportation . The network began with campaigns and political events to draw attention to the situation of refugees in Germany.

Elie Wiesel is considered to be the originator of the slogan . He is said to have used it for the first time in 1988 in English ("No Human Being Is Illegal") on a flyer for the "National Campaign for the Civil and Human Rights of Salvadorans ".

The network was founded in 1997 at the documenta X in Kassel . In just a few weeks, more than 200 groups and organizations as well as thousands of individuals joined an appeal in the form of a manifesto to “support refugees and migrants regardless of their residence status with entry or onward travel, to provide migrants with work and 'papers', medical To ensure supply, school and training, accommodation and material survival. ”The Office for the Protection of the Constitution commented on the process with the words:“ Alliances of church and anti-racist groups that had previously had a distant relationship were formed ”. In 1997, there was an acceptance of forms of action in which the state executive's claim to deport people was far into conservative circles. For example, in July 1997 the nuns of the Burg Dinklage Monastery carried out a sit-in strike against the planned deportation of a Ukrainian family.

After the death of Aamir Ageeb, kmii started the deportation.class campaign on May 28, 1999, targeting the Star Alliance airlines , in this case Lufthansa in particular, which were involved in deportations. The 2001 together with Libertad! The online demonstration carried out was the culmination of this campaign.

Until 2004 there were biannual federal meetings or anti-racist forums of kmii, but after that this structure increasingly dissolved. At the same time, the international "No Border" network also stopped its regular meetings. Since then, kmii activists have been working in local groups, the networking of which is largely digital.

The local kmii group in Hanau was awarded the Georg Bernard plaque by IG Metall Mitte in 2012 . According to IG Metall, this plaque is given to individuals and institutions “for the struggle to maintain democracy”. In the justification, the union expressly rated deportations as “threatening”, and kmii was praised for its work on behalf of refugees.

Goals of the movement

The slogan contains a criticism of the common use of language, which gives the impression that people themselves are "illegal" so that they should not exist.

Regarding the use of language, the Federal Agency for Civic Education states: “It would be incorrect, neither politically nor legally, to speak of 'illegal migrants' or 'illegal immigrants' because it is not the people themselves that are illegal, but the act they perform the border crossing. In critical migration research, attempts are made to circumvent the classification legal / illegal by using the description 'irregular' or 'undocumented'. The latter in particular has established itself in French under the term ' sans papiers '. "

The effectiveness of the language criticism can be seen from the fact that in 2005 the Federal Office for Migration and Refugees introduced the term “illegally staying third-country nationals in Germany”. The office emphasizes that the attribute “illegal” in connection with personal designations cannot be found in the German legal sources on aliens law, unlike in regulations and guidelines of the European Community. A corresponding use of language is therefore colloquial . In an official declaration dated June 12, 2015, the Lower Saxony state government consistently uses the term “paperless people” as a synonym for “people without a defined residence status”.

Criticism of the legal situation

Demand for free movement of persons as a human right

The slogan contains a commitment to the view that the illegal actions of immigrants are legitimate, because according to kmii Cologne every person should be able to decide for himself where he lives best. Representatives of the British sister network “No Borders” argue that migrants are not “victims”; they made the decision to cross borders and did not wait long to get official permission to do so, and that would have to be approved by helpers. Both networks regard freedom of movement as a human right . This view criticizes the provision of Article 11 of the Basic Law , which guarantees freedom of movement only as a civil right , but also the provision of Article 2, Paragraph 1 of Protocol No. 4 to the European Convention on Human Rights , according to which this is only applicable to persons who are “legally “Reside in the territory of the state concerned. 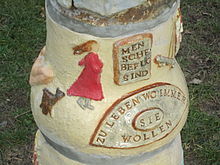 Inscription on the welcome column at a refugee hostel in Bremen-Osterholz : "People are authorized to live wherever they want"

Fabian Georgi explains in the magazine published by the Rosa Luxemburg Foundation “Luxemburg. Social analysis and left practice ”the“ left ”strategy behind the slogan:“ With slogans like ›No man is illegal‹ and ›No border! No Nation! ‹[The activists] put the idea of ​​global freedom of movement on the agenda of social movements. They describe the idea that all people can move freely on earth, that they can live and settle where they want and enjoy equal rights, regardless of their 'nationality', their 'citizenship' or other criteria. Self-organized sans-papiers and refugees as well as the NoBorder movement have constituted global freedom of movement as a counter-hegemonial project, as a political project that radically questions the ›deep hegemony of borders‹. ”However, Georgi admitted in 2012 that on the following questions There was a lack of conclusive answers that could reach consensus among the left: “How can one imagine a 'world without borders'? How do you justify this goal against the inevitable rejection? What is the relationship between the left-liberal appeal for human and refugee rights and the no-border criticism? How are migration controls and capitalism connected and how are the struggles against them? "

The Green Youth Berlin also condemns the " ethnocentric and racist idea that only certain people are allowed to live in Germany."

Ute Koch from the German Caritas Association explained in 2006 that the regulatory thinking that predominates in Germany systematically leads to a dead end. Despite the relatively strict controls on foreigners compared to other European countries (by the local immigration authorities, the police, the Federal Border Police, the main customs offices and the Federal Employment Agency) and despite the specificity that irregular residence in Germany is assessed as a criminal offense , it does not succeed To discourage foreigners from irregular residence in Germany. One can learn from other countries that it can make sense for states to withdraw control and legal enforcement claims in order to guarantee legal protection, health care and school education for their children even if people are illegally involved. Ute Koch recommends Germans to "relax". "Civil society institutions" (such as those who are active in the church at kmii) are required to moderate the human rights restrictions emanating from the state as long as they exist.

Help for individuals who are illegally resident

Organizers of church asylum are mainly concerned not with a radically different policy, but with the fact that “cases of hardship” are re-examined, i. This means that individual persons obliged to leave the country can once again be heard. In essence, the issue is that those granting church asylum are of the opinion that state authorities are not considering carefully enough that their protégés are threatened with torture and death in their country of origin or that deportation would result in "unacceptable social, inhumane hardship."

The “Ecumenical Federal Working Group on Asylum in the Church” points out that the Federal Office for Migration and Refugees and leading representatives of the churches have agreed that from May 2015 congregations will not only forward their church asylums directly to the BAMF, but also the contact persons for their church asylum Inform regional churches or dioceses about it. In December 2015 the Ecumenical Working Group announced that the institution of church asylum was still necessary.

Today the kmii local groups work on work and migration and address the interrelationships between the economy and the unequal treatment of foreigners , which kmii assesses as racism . Kmii has been calling for “general and equal access to all rights, with or without papers” since 1997. The aim is to advise people without papers on how to prevent the implementation of state sanctions (especially detention and deportation) and to provide them with practical help convey and generate public awareness of their situation.

kmii Wuppertal expressly provides information about the movements and organizations with which the local group Wuppertal has networked. These are the kmii local groups in Cologne and Hamburg, "Karawane Wuppertal", " Amnesty International Germany", " Pro Asyl " and " lobbycontrol ".

Criticism of the conception and practice of kmii

The slogan “no man is illegal”, clearly visible from afar, on a house wall on Hafenstrasse in Hamburg-St. Pauli

In reports for the protection of the constitution , the movements no man is illegal and deportation.class are mentioned because of their proximity to alleged left-wing extremist “connections”. PRECLAB, a European network for research into precarious living and working conditions, criticizes the division of kmii into a moderate and a left-wing radical. In the mid-1990s, the left-wing radicals rated it as an “affront” that the magazine project “off limits” within the kmii network called for the legalization of paperless people. Because the main concern of the radicals was the demand for open borders and the organization of illegality. The criticism of the opponents of legalization led to a "deepening of the divisions within the anti-racist division of labor".

As early as 1999, the platform nadir.org criticized the fact that many founding members of kmii had not informed themselves carefully enough about which fellow campaigners had joined together in the movement. In the context of a cultural event, a campaign was started in the summer of 1997 that "acted as a kind of button for different Antira activities that already existed" from the start. "All of these projects of the most varied quality and everyday intensity have the characteristic that they have not previously had a common political Antira strategy, let alone related tactics". Around the turn of the millennium, “a political anti-raid strategy that makes a moral appeal to society or the state authorities and invokes human rights,” nadir.org criticizes “morally supported solidarity campaigns”, in the context of which “ "Life stories" of "good" people who are threatened with deportation "would be told in public, who would have" drawn one of the coveted "medialess" ".

“Nobody is illegal” is a widespread slogan of activists outside of Germany when it comes to “ sans papiers ”. B. in Switzerland by Solidarité sans frontières and the right to stay movement as well as in Austria u. a. taken up in the debate on the Zogaj family asylum case . In addition, the Swiss right to stay movement uses the graphic scheme of the kmii logo for its slogan “Right to stay for all”.

The British network "no one is illegal (noii)" has no consideration for moderate members such as the supporters of church asylum. In 2003 it stated in its manifesto that it considered the method of obtaining amnesty for some to be wrong by propagating the motto: "Right To Come And Stay For All - Not Amnesty For Some".

Commons : Nobody is illegal  - collection of pictures, videos and audio files