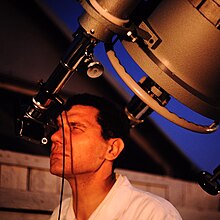 Hans Oberndorfer (born July 25, 1925 in Munich , † March 10, 2006 ibid) was a German astronomer , author and long-time director of the Bavarian People's Observatory in Munich .

During the Second World War, Hans Oberndorfer became a Soviet prisoner of war for several years , during which he was surprised by a total solar eclipse and then gave a lecture about it in front of his fellow prisoners. For this he received an extra ration of bread from the camp management.

After his return to Munich in 1948, he devoted himself to amateur astronomy and popular education at the Bavarian People's Observatory in Munich. In 1949 he was elected to the board of the association. Until 1965 he was a chemigrapher for the Süddeutsche Zeitung . After 1965 he was head of the public observatory for many years until he retired at the end of 1990. During this time he gave lectures and courses on astronomy . His narrative style and his expert contributions soon made him known beyond the borders of Munich. 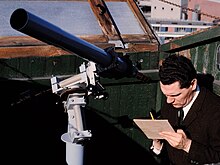 Among other things, Oberndorfer systematically devoted himself to observing the sun over many years , drawing the sun and recording the relative number of sunspots .

The asteroid with the number 3275 Oberndorfer was named in his honor .

Oberndorfer is the author of books and specialist articles in various magazines. Until 1995 he headed the Telescopes and Accessories section of the Vereinigung der Sternfreunde (VdS).

In addition to astronomy , Oberndorfer was very interested in the sinking of the Titanic and kept giving lectures about it.

The city of Munich honored Hans Oberndorfer with the Munich shines culture award .