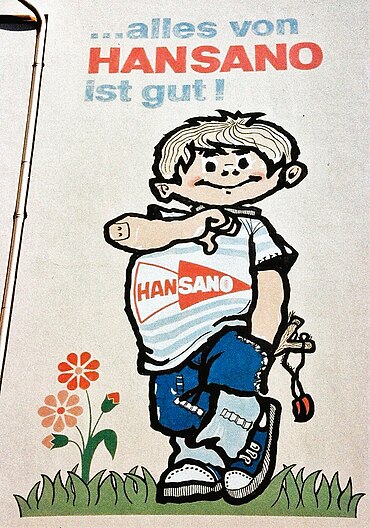 The Hansa Arla Milch eG is a milk processor, whose seat since 1995 in Upahl, Mecklenburg-Vorpommern , is located. Several North German dairies have merged into it.

The Hansa-Milch was established in 1889 as a dairy farm - cooperative based at the parade in the then Free and Hanseatic City of Lübeck established. Eleven years later, the company moved to what was then the gates of the city, on Fackenburger Allee not far from the company W. F. L. Beth of the industrial pioneer of dust removal , Wilhelm Beth . In 1963 several cooperative dairies from northern Germany merged and the brand name became Hansano . On the walls that surround the former premises of Lübeck, are still pictures of the created in 1963. sympathy carrier Hansi with the advertising slogan "... all of Hansano is good!"

After the reunification of Germany , the cooperative also expanded to Mecklenburg-Western Pomerania . In 1995 the company moved to the north-west Mecklenburg municipality of Upahl , where a new dairy was built. Old locations were given up for it.

At the beginning of 2011, around 1,000 members of the Hansa-Milch eG cooperative approved a merger with the Swedish-Danish dairy group Arla Foods amba . The operating company of the Upahl dairy, Hansa-Milch AG , was completely transferred to Arla. Since then, the cooperative has been called Hansa Arla Milch eG .

In 2010 the then Hansa-Milch AG achieved sales of around 350 million euros. Every year around 700 million kilograms of milk are processed by around 700 milk suppliers in Germany and neighboring countries. The company employs around 450 people.

The product range consists of around forty different dairy products. These include fresh and UHT milk as well as mixed milk beverages, cream, yoghurt, quark, skyr (cream cheese), powdered milk and condensed milk. Hansa-Milch has been operating under the Hansano brand since 1963 .