A resin canal (also: resin duct ) is an elongated, tubular intercellular space that is lined with resin-secreting epithelial cells. 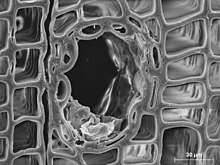 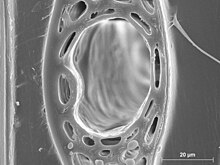 Resin canals occur in a number of native conifers: in the genera spruce ( Picea ), larch ( Larix ), pine ( Pinus ) and Douglas fir ( Pseudotsuga ). In contrast, yew ( Taxus ), fir ( Abies ) and juniper ( Juniperus ) are generally resin-free, at least as far as the wood is concerned. Resin formation in the bark of the fir is known . Resin canals can also be found in some tropical woods (e.g. Meranti , Bangkirai , Kapur). In the wood, the resin channels run lengthways and across the trunk axis. They are networked with one another and form a coherent, three-dimensional system. The ducts oriented in the axial direction occur predominantly in the latewood , the radially oriented ducts are without exception in the wood rays . The diameter of the axial resin ducts is larger than the radial. Anatomically, two types of resin canals can be distinguished: narrow canals with thick-walled epithelial cells in Douglas fir, spruce and larch and wide canals with thin-walled epithelial cells in pine species.

Resin is formed in the epithelial cells surrounding the resin canals and expelled into the canal. Resin formation and precipitation mainly takes place in the sapwood zone . When the cambium is injured , the epithelial cells are able to absorb water, swell and direct the resin to the injured area under high pressure. Resin canals usually develop in a schizogenous manner , in that intercellular spaces enlarge due to the divergence of previously grouped parenchymal cells . However, lysigenic channels that are formed by the dissolution of individual cells can also occur. The latter are referred to as traumatic resin canals (also: wound resin canals, facultative resin ducts ). As a result of injury to the standing trunk, the cambium can be stimulated to form abnormal resin channels. In the tangential plane, a number of axially extending, closely spaced and resin-filled channels of often unusual size are created. The resin canal system can be disturbed by fungal attack or by irritations in the area of ​​the cambium. Under these circumstances, resin can escape from the channels into the neighboring wood tissue - the wood silts .