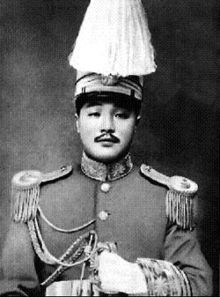 He Long ( Chinese  贺龙 , Pinyin Hè Lóng , born March 22, 1896 , Sangzhi ; † June 8, 1969 ) was an important communist army leader during the Chinese civil war . After the founding of the People's Republic of China , he was Marshal and Vice Prime Minister.

He Long was the son of a low-ranking officer who was also a member of the Gelaohui (Society of Elder Brothers), a secret society that had existed since the beginning of the Qing Dynasty . He never received any schooling, and in his childhood and youth he tended cattle.

However, his revolutionary career also dates back to his youth - he killed an imperial tax collector with a butcher's knife after the latter allegedly killed his uncle.

He Long joined the Nationalist Party ( Kuomintang , KMT) in 1914 . In 1923 he became commander of the 20th Army of the Kuomintang, and by the mid-1920s he had finally risen to an important local military leader and as such took part in the northern expedition on the Kuomintang side . In 1926 or 1927 he joined the Chinese Communist Party ; KMT leader Chiang Kai-shek tried unsuccessfully to win He Long back for the KMT and retaliated by murdering 100 of He Long's relatives, including three sisters and one brother. In 1927 He Long was among the leaders of the Nanchang Uprising .

During the Long March , He Long became an important supporter of Mao Zedong's lineage . From 1934, when he was 36 years old, He Long commanded the Second Army of the Chinese Red Army. He was known as a charismatic , mustache-bearded man who was very good at talking and motivating. His troops played an important role in the Chinese civil war .

After the defeat of the Kuomintang , He Long took part in the founding celebrations of the People's Republic of China in Tian'anmen Square on October 1, 1949, alongside Mao . He was appointed as Deng Xiaoping's deputy head of the Southwest Office in Chongqing , where he was jointly responsible for building communist rule in Southwest China. In 1955 he was named one of the Ten Marschalls and by the end of the 1950s he also became secretary of the sports commission.

In the late 1960s, He Long fell victim to the Cultural Revolution . Lin Biao , who fought for more power within the military , had He Long portrayed as a robber and warlord in mass demonstrations from 1966 onwards . Together with Jiang Qing , Mao Zedong's wife , he organized the hospitalization of the diabetic and insulin-dependent He Long, where he died on June 8, 1969. He was probably injected with glucose intentionally .

In 1974 the CP Central Committee decided to rehabilitate He Long, but his full rehabilitation was not announced until October 1982.

Commons : He Long  - collection of pictures, videos and audio files