The refuge built in 1987 above the Heidenloch

The Heidenloch is a 55 meter deep historic shaft with a diameter between three and four meters on the Heidelberger Heiligenberg . It is located a few meters west of the observation tower on the road to Heiligenberg. The shaft has been a frequently described attraction since early modern times. For a long time it was walled over by a vault and barred. The shaft was opened in 1936 and was first thoroughly researched by employees of the Kurpfälzisches Museum . In 1987 a refuge was built over the excavated shaft.

Cross section of the Heidenloch. Found walls are marked in gray. The vault, which was removed in 1936, is the upper end.

Who built the Heidenloch for what purpose is unknown and cannot be clearly explained from the excavation findings so far. The most plausible explanation is that water was searched for during the prehistoric or, at the latest, during the Roman era, but none was found, and that various other excavation and expansion measures were carried out on the shaft over the years. In any case, the hole had been changed many times by the early modern period. Among other things, the bottom of the shaft was lined like a jacket, it was partially filled first with rubble and later with objects from the monasteries, the shaft head was fastened with square masonry and the hole was covered by a wall vault that only had a small opening which was later heavily barred until the exploration in the 20th century.

The Heidelberg geographer Sebastian Münster mentioned in 1548 “wonderfully old pagan masonry holes and also Gefencknus” on the Heiligenberg. In the early 17th century, Matthäus Merian described “wonderful hoelines with walls enclosed, and made like a prison nut, […] as long as one respects Roman buildings.” Merian also shows the opening of the holy hole against the backdrop of the ruins of the Michaelskloster in the picture.

Early modern authors often sought their explanations in the realm of legend. There was speculation about a secret passage leading from the mountain top down to the Neckar. The geographer Matthis Quad described the Heidenloch as a well shortly after 1600: “In my time it was so full of wood and stones from the ruins of the church that the view did not go any deeper as I noticed. The boys at school often used to make up stories about how a white goose was once thrown into the hole upstairs and it came out again down on the Neckar and was completely black. ”A Count von Zimmer also quoted the story of the goose and said he knew that this came out again at the Neuburg monastery . The Swiss pastor Hans Rudolf Rebmann ( Ampelander ) from Bern described in his epic Ein Neu, Lustig, Ernsthracht, Poetisch Gastmal and Talk Zweyer Bergen , published in 1606, the Heidelberg Heiligenberg and claimed that Satan once sat in Heyden Loch and made his false prophecies proclaimed. But he also admitted that the hole may only have been dug to bring the water from the Neckar to the mountain top.

Scientific exploration of the Heidenloch began in 1936 when the hole was exposed under the direction of Paul Herbert Stemmermann . After his team had been lifting material out of the hole with ladders, scaffolding decks and winches for about a year, heavier equipment had to be installed to continue the work, which involved removing the historic stone vault over the hole. Stemmermann's team cleared the entire shaft down to the bottom. Even the well casing from the bottom of the shaft at a depth of 52 meters was lifted in order to get a few meters below the floor slab below. In 1938 the excavation work was stopped. The stones from the well casing were placed back in the bottom of the shaft and the shaft was covered with thick wooden beams.

In the post-war period, archaeological research on the Heiligenberg was initially devoted to the Michaelskloster. The archaeologist and head of the archaeological department of the Kurpfälzisches Museum in Heidelberg, Berndmark Heukemes , suggested that the city administration should also uncover the Heidenloch, but initially went unheard.

View into the Heidenloch refuge, photo from 2013

The Heidenloch continued to be an attraction for tourists and onlookers. The wooden cover had to be renewed several times. Finally, a high metal fence was erected to keep out the curious. The Schutzgemeinschaft Heiligenberg, founded in 1973, coordinated the uncovering and conservation of the ruins. An exercise initiated by the Technical Relief Organization at Heidenloch revealed that an artificial barricade had formed in the shaft as a result of broken and fallen beams and the vast amount of rubbish that onlookers had repeatedly thrown down between the beams. Finally, in the 1980s, the protection community presented the older plans of Heukemes again, which the city has now approved, so that the Heidenloch could be further exposed.

During the work that began in May 1987, the shaft was completely exposed again. The clearing alone took about two months. The stones of the well jacket were recovered again and came to the Kurpfälzisches Museum. From July to August 1987 the refuge was built over the Heidenloch. A concrete parapet protects the onlookers and shows that this is not a reconstruction of a possible historical well parapet, but a new, functional parapet structure. Illumination of the shaft enables a better view into the depth. Information boards explain the shaft and the history of the research.

Finds from the shaft 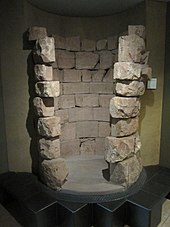 Well coat from the bottom of the Heidenloch, erected around 1100, today exhibited in the Kurpfälzisches Museum in Heidelberg

When the shaft was uncovered in 1936, initially hewn stones and parts of columns were found, as well as a number of metal utensils that came from the monastery, such as keys, horseshoes, stirrups and knives. These finds end at a depth of 26 meters.

The so-called portrait of a woman is carved into the wall of the shaft like a line at a depth of around 22 meters .

Below 26 meters only stones and rubble were found, an indication that this filling must have come from the time before the monastery was abandoned, as no more building elements were to be found. The well only seemed to end at a depth of 52 meters, but a floor slab was found here. as well as a round masonry casing. The cuboids of the fountain jacket showed a stonemasonry technique that corresponds to the stonemasonry work on the east side of the Speyer Cathedral . Presumably Lombard stonemasons from Speyer were recruited to build the well shaft. This made it possible to date the mantle to around 1100 AD. The well jacket was removed and is now in the Palatinate Museum.

When the end plate was lifted, a second sole appeared underneath , which presumably consisted of Roman brick layers. This bottom could suggest the Romans were the builders of the shaft.

The Heidenloch remained in public memory as a semi-legendary building. The French poet Victor Hugo described a visit around 1840, when a nocturnal walk over the Heiligenberg to Heidenloch took him: “As I walked over the ridge, a few steps away from the barely recognizable path, I noticed a species under thorn bushes Hole I went to It was a fairly large, rectangular pit, ten or twelve feet deep and eight or nine feet wide, into which sunk reddish brambles, through whose underbrush individual rays of the moon penetrated. On the ground I made out indistinctly a pavement made of wide slabs on which there were puddles of rain, and on the four walls I saw mighty masonry made of huge stones that had become shapeless and ugly under the grass and moss. I thought I saw a few rough sculptures in the middle of the rubble and under these ruins a thick, round block that was slightly bulged and had a small square hole in the middle; it could be a Celtic altar or a 10th century capital. However, there were no stairs to go down into the pit. And at that moment I hear a deep, weak voice behind me utter the word 'Heidenloch'. Although I can only speak a little German, I know this word. I turn around. Nobody on the heather; the wind blows and the moon shines. Nothing else."

In addition to the historical authors who spin legends about the Heidenloch in travel reports and descriptions of the region, the mysterious shaft has repeatedly inspired authors up to the present day.

A more recent example of the literary reception of the Heidenloch is the author Martin Schemm , who wrote a fantastic mythological novel about it, which takes up the old legends and sagas about this place and also has a new myth in store. The novel offers a lot of local color and information from the history of the Heiligenberg and describes in the form of files supposed horrors, at the center of which is the Heidenloch. The book was published in the series of the Heidelberg City Archives and set to music as a radio play by the SWR in 2009 .