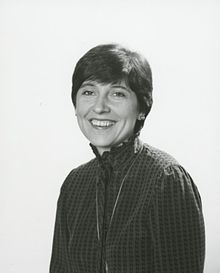 Helene von Damm (born as Helene A. Winter; born May 4, 1938 in Ulmerfeld , Austria ) is an American politician on the side of the Republicans and former ambassador of the United States in Austria.

Helene von Damm emigrated to the United States in 1959. She served as Ronald Reagan's personal secretary for two terms both during the California governorate campaign in 1966 and as assistant and finance manager during his presidential campaign in 1980. When Reagan was elected President of the United States , received from Damm was given responsibility for the President's personnel department in 1981 and carried out this activity until she was appointed US ambassador to Austria in 1983.

Within two years, the third divorce and then the fourth marriage, with the Sacher Hotel owner Peter Gürtler , took place, which almost caused a scandal in the Austrian gossip columns. She lived with the actor Jürgen Wilke until his death in May 2016 .

Because of the discrepancy between her professional and personal lives, von Damm wrote to President Reagan in a personal letter in June 1985 that her resignation was inevitable. The position at the US Embassy in Vienna was filled again with Ronald Lauder in December .