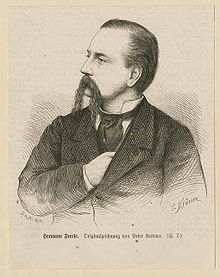 Johann Oscar Hermann Freese (born May 14, 1819 in Pomerania ; † July 25, 1871 in Hasenfelde, municipality of Steinhöfel near Fürstenwalde ) was a German painter .

Freese came to painting late. Only at the age of 34 could he afford private lessons from 1864 onwards. Freese became a student in Wilhelm Brücke's studio in Berlin and later switched to Carl Steffeck . From the landscape painting of his teachers, Freese came to his animal and hunting pictures early. Freese found his favorite motifs in the various depictions of deer .

His hunting trips always gave the passionate hunter suggestions, which he then artistically implemented in the studio. By his own admission, Freese had seen many of his dramatically staged hunting scenes himself.

At the age of 41, the passionate hunter Hermann Freese suffered a fatal hunting accident on July 25, 1871 near Hasenfelde, near Fürstenwalde.